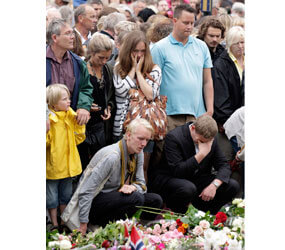 VATICAN CITY – In the wake of two terror attacks in Norway that left at least 93 people dead, Pope Benedict XVI called for an end to hatred and ideologies that promote evil.

“We are all deeply saddened by the serious terrorist acts,” the pope said after praying the Angelus with pilgrims at the papal summer residence in Castel Gandolfo July 24.

The pope launched an appeal “to abandon once and for all the path of violence and avoid principles of evil.”

As a further expression of his condolences and prayers for those affected by the attacks, the pope sent a message to Norway’s King Harald V. Written on behalf of the pope by Cardinal Tarcisio Bertone, Vatican secretary of state, the pope said he was praying for all those affected by “the acts of senseless violence perpetrated in Oslo and Utoya.”

The pope asked that the country “be spiritually united in a determined resolve to reject the ways of hatred and conflict and to work together fearlessly in shaping a future of mutual respect, solidarity and freedom for coming generations.”

Explosives ripped through Norwegian government headquarters in Oslo July 22, leaving seven people dead and dozens injured. Shortly after the bombing, witnesses said a man dressed as a police officer shot at people attending a summer youth camp run by the country’s governing Labor Party on the island of Utoya. Police said at least 86 people died at the camp, but authorities were searching the island and the waters just offshore for several missing people.

At least 96 other people were injured in the twin attacks.

The suspect, 32-year-old Anders Behring Breivik, has admitted to carrying out the killings but has not admitted any criminal wrongdoing. He pleaded not guilty in an Oslo court July 25 after being charged under the country’s terrorism act.

His lawyer told journalists July 24 that his client thought “it was gruesome having to commit these acts, but in his head, they were necessary.”

“He wished to attack society and the structure of society,” said the lawyer, Geir Lippestad.

The suspect is believed to have links to far-right groups and to have produced materials espousing anti-Muslim and anti-immigration views, and a desire to bring about a revolution against the government in Norway.

Meanwhile, Bishop Bernt Eidsvig of Oslo told Vatican Radio July 25 that the country was united in mourning for the victims and still in shock over the killings.

“It has affected every one of us. Despite political differences or other differences, this is a tragedy,” he said. “We do not know anything like it in our history, that 100 people are killed in cold blood. So it is creating unity, and in spite of the grief, also strength.”

Bishop Eidsvig said in the interview that people were shocked the prime suspect was Norwegian saying, “Of course in all countries, there are disturbed and misled persons. I am quite sure he is one of them. He must be mentally disturbed. I don’t think ideology is sufficient to explain this.”

The bishop said he expected a traditionally lax approach to security around government buildings would be quickly reversed, saying they had already been planning to block off the street where the suspect allegedly parked a car with a bomb inside.

“In Oslo, you’ve practically been able to drive your car to the prime minister’s office or to the king’s palace if you pretended to have business there. But I think all this will come to an end fairly soon,” he said. “I think we are waking up to reality.”

President Barack Obama sent condolences to the people of Norway soon after the attacks. He said the incidents were a reminder that the world must work together to prevent future terror attacks.

The president recalled in a statement the warm reception he received from Norwegians during his 2009 trip to Oslo to receive the Nobel Peace Prize. “So our hearts go out to them, and we’ll provide any support we can to them as they investigate these occurrences,” Obama said.