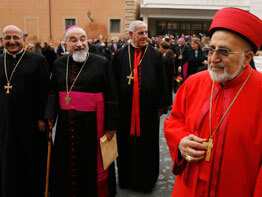 VATICAN CITY – Pope Benedict XVI called the kidnapping and death of an Iraqi archbishop “an act of inhuman violence that offends the dignity of the human being and seriously harms the … coexistence among the beloved Iraqi people.”

Chaldean Catholic Archbishop Paulos Faraj Rahho of Mosul, 65, was kidnapped Feb. 29 in an attack that left his driver and two bodyguards dead. The pope had made several public appeals for his release.

Catholic leaders in Iraq said March 13 that they had recovered the archbishop’s body after the kidnappers told them where they had buried him.

In a March 13 telegram to Cardinal Emmanuel-Karim Delly of Baghdad, patriarch of the Chaldean Catholic Church, Pope Benedict said that after being informed of “the tragic death” of the archbishop, whom he called a “zealous pastor,” he wanted to let Chaldean Catholics and all Christians in Iraq know that he is close to them.

The pope also said he was praying that the Lord would show “his mercy so that this tragic event would serve to construct a future of peace in the martyred land of Iraq.”

“We all had continued to hope and pray for his liberation,” Father Lombardi said. “Unfortunately, the most absurd and unjustified violence continues to weigh on the Iraqi people and particularly on the small Christian community, to whom the pope and all of us are particularly close in prayer and in solidarity at this moment of great pain.”

Father Lombardi said the Vatican hoped “this tragic event” would lead to a greater commitment by all, particularly the international community, to work for peace in Iraq.

Chaldean Auxiliary Bishop Shlemon Warduni of Baghdad told the Italian Catholic agency SIR that the kidnappers had informed church leaders March 12 “that Archbishop Rahho was very ill,” then a few hours later they phoned again to say he had died.

“This morning (March 13) they telephoned to tell us they had buried him,” Bishop Warduni said.

The church sent several young men to an area just outside Mosul where the kidnappers had said the grave was located, and the body was recovered.

“We do not yet know if he died of causes tied to his precarious health or if he was killed,” Bishop Warduni said, referring to the archbishop’s heart condition, for which he needed medication daily. “The kidnappers told us only that he was dead.”

Chaldean Bishop Rabban al Qas of Arbil told the agency AsiaNews, “It is a heavy cross for our church ahead of Easter.”

Archbishop Rahho was kidnapped after leading the Way of the Cross service at the Church of the Holy Spirit in Mosul. He was in his car with his driver and two bodyguards when the kidnappers attacked. The three people who were traveling with him were killed.

While mediators were in contact with the kidnappers early on, police and military intelligence officers were unable to find them.

Iraqi Prime Minister Nouri al-Maliki March 4 ordered Iraqi forces to maximize their attempts at releasing the archbishop, but the commander of U.S. forces in northern Iraq said at the time that he was not confident the archbishop would be found alive.

Maj. Gen. Mark P. Hertling said March 5 that Archbishop Rahho “could easily be killed and that would be really unfortunate,” reported the British news agency Reuters.

As soon as the news of the archbishop’s kidnapping reached the Vatican, Pope Benedict began appealing for prayers for his release and pleading for an end of the violence in Iraq.

So many Iraqis “continue to suffer from blind and absurd violence, which is certainly against God’s will,” the pope said in his March 9 appeal.