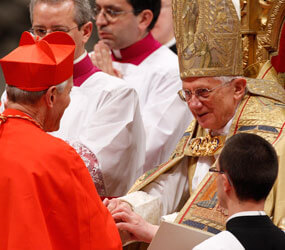 VATICAN CITY – Pope Benedict XVI created 24 new cardinals, including two from the United States, and called them to be strong in spreading and defending the faith and promoting peace and tranquility within the church.

Cardinal Donald W. Wuerl of Washington and Cardinal Raymond L. Burke, prefect of the Vatican’s supreme court, joined other new cardinals from 13 countries Nov. 20 in formally professing their Catholic faith and fidelity to the pope.

After the oath, all but one of the new cardinals knelt before the pope to receive a red biretta, a three-cornered ret hat, which the pope said, “signifies that you must be ready to act with strength, to the point of shedding blood, to increase the Christian faith, for the peace and tranquility of the people of God and for the freedom and growth of the holy Roman church.”

The pope also assigned the new cardinals a “titular church” in Rome, making them members of the Rome diocesan clergy, which is what the church’s first cardinals were. Cardinal Burke’s titular church is St. Agatha of the Goths; Cardinal Wuerl’s is St. Peter in Chains, the church famous for hosting Michelangelo’s statue of Moses.

The consistory to create new cardinals took the form of a prayer service in St. Peter’s Basilica. With the exception of the pope’s homily and the prayers of the faithful, the service was in Latin. It was the first papal service featuring the new director of the Sistine Chapel Choir, Monsignor Massimo Palombella, and the musical innovations included a brass section and the Psalm sung by a trio.

Outside the basilica a storm was approaching and as Pope Benedict announced the name of the new Cardinal Laurent Monsengwo Pasinya of Kinshasa, Congo, the applause for him was accompanied by a roll of thunder.

Only Italy has more cardinals. With 10 new cardinals, Italy has a total of 48 members of the college, 25 of whom are under 80.

In his homily, Pope Benedict said he chose as cardinals “pastors who govern important diocesan communities with zeal, prelates in charge of dicasteries of the Roman Curia or who have served the church and the Holy See with exemplary fidelity.”

Pope Benedict told the new cardinal’s that Jesus’ “style of living became the basis of new relationships within the Christian community and of a new way of exercising authority.”

Even after Jesus explained to the disciples that following him would involve suffering, they demonstrated that they had “expectations and plans for greatness, authority and honor in the eyes of the world,” the pope said.

Jesus was patient with them, he said, but he also made it clear that to be his disciples they must be totally obedient to God and follow “this road that passes through humiliation, suffering and death for love.”

Pope Benedict told the new cardinals they must recognize that becoming “unique and precious” collaborators in the papal mission to serve the church is not an honor they can take credit for, but is a vocation to which they are called.

Jesus’ teaching that authority means humble service is a message that continues to be valid for the church, “especially for those who have the task of guiding the people of God,” the pope said. “It is not the logic of domination, of power according to human criteria, but the logic of bowing down to wash feet, the logic of service, the logic of the cross, which is at the basis of every exercise of authority.”

He told the pope that being called to the College of Cardinals “gives rise in us to feelings of awe for the magnanimity and love of the Holy Father for us. With trepidation we recognize our limits before the awareness of the great dignity with which we are being clothed and which we are called to give witness to with our lives and our activities.”

Meeting reporters after the consistory, Cardinal Wuerl said it was “a glorious day” with the basilica filled with people from around the world, showing the universality of the church.

“Every believer, every Catholic has a tie with the pope, but the cardinals – because they are asked to work very, very closely with him – have a special bond,” he said, and the visible sign of that is the red hat.