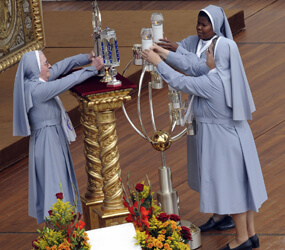 VATICAN CITY – Pope Benedict XVI canonized five new saints and said their dedication to the Eucharist, the poor and the world of work made them models for today’s Christians in an era of economic crisis.

By orienting their lives to Christ, the five men and women showed that “it is possible to lay the foundations for construction of a society open to justice and solidarity, overcoming that economic and cultural imbalance that continues to exist in a great part of our planet,” the pope said.

The pope celebrated the canonization Mass in St. Peter’s Square April 26, joined by tens of thousands of pilgrims who held up photos or drawings of the saints. Four of the new saints were Italian and one was Portuguese.

Dressed in bright gold vestments, the 82-year-old pontiff listened as biographies of the five were read aloud, and then pronounced the canonization formula, drawing applause from the crowd. Afterward, relics of the new saints were brought to the altar.

In his homily, the pope said the saints’ life stories hold valuable lessons for modern Christians. Each of the newly canonized had a special devotion to the Eucharist, and each transformed that spiritual power into social action, he said.

The five new saints are:

– St. Arcangelo Tadini, a parish priest from the northern Italian area of Brescia, who preached strongly in defense of workers’ rights during the industrialization period of the late 1800s. He organized an association to help factory workers, established a spinning mill to give young girls of the area gainful employment, and eventually founded a religious order of sisters who worked alongside women in the factories.

Pope Benedict said his Gospel-inspired social activity was “prophetic” and is particularly relevant in the current economic crisis. He said the saint taught people that a deep personal relationship with Christ is the key to bringing Christian values into the workplace.

– St. Bernardo Tolomei, who, inspired by his love for prayer and for manual labor, founded a unique Benedictine monastic movement in Italy in the 14th century. Born in Siena, he was forced by an onset of blindness to give up a public career, and he decided to found a small hermitic community. He later founded the monastery of Santa Maria di Monte Oliveto Maggiore, and died in 1348 of the plague while helping victims of the disease; his burial place, in a common pit, has never been found.

The pope called him “an authentic martyr of charity” and said his service to others was an inspiration to all.

– St. Nuno de Santa Maria Alvares Pereira, a Portuguese army hero in the late 1300s, who, after the death of his wife, abandoned his military career and gave up his wealth to enter a Carmelite monastery. In particular he helped the poor, distributing food to the needy. He was totally dedicated to Marian prayer, and fasted in Mary’s honor three days of the week.

The pope said he was happy to canonize a person whose faith grew while in the military, a context generally viewed as unfavorable to holiness. It demonstrates that the values and principles of the Gospel can be realized in any situation, especially when they are employed for the common good, he said.

– St. Geltrude Comensoli, born in the mid-19th century in the Brescia area, who established a religious institute dedicated to the adoration of the Eucharist. In approving the institute in 1880, Pope Leo XIII asked her to include as part of its mission the education of young female factory workers.

Pope Benedict said this connection of contemplative charity with “lived charity” was particularly important “in a society that is lost and often wounded like our own.” He said the saint’s life shows that adoration takes precedence over acts of charity, because “from love for Christ died and resurrected, and truly present in the Eucharist, comes that evangelical charity that pushes us to consider all men as brothers.”

– St. Caterina Volpicelli, who founded a community of sisters centered on Eucharistic adoration and service to the poor, especially young orphans, in the slums of Naples in the mid-1800s.

The pope said she correctly saw that in order to bring the Gospel to bear on society it was necessary to “liberate God from the prisons in which man has confined him.”

Banners depicting the newly canonized were hung on the facade of St. Peter’s Basilica, and fluttered in the breeze during the two-hour liturgy. At the end of the Mass, the pope greeted pilgrims in several languages and said he hoped the new saints would inspire people to witness the Gospel courageously in their daily lives.