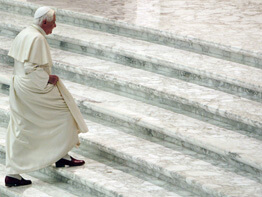 VATICAN CITY – Pope Benedict XVI said he finds consolation in the New Testament stories of the apostles and first disciples arguing with each other.

Continuing his series of audience talks about the leaders of the early church, Pope Benedict spoke Jan. 31 about St. Paul and St. Barnabas arguing over whether they should take another person with them on a mission.

“So, even among saints there are contrasts, disagreements, controversies,” the pope said.

“This appears very consoling to me, because we see that the saints did not drop as saints from heaven. They were men like us with problems and even with sins,” the pope said before he was interrupted by applause.

“Holiness consists not in never having made a mistake or sinned,” he said, but rather it grows with “conversion, repentance, with a willingness to start over and, especially, with the ability to reconcile and forgive.”

“We can all learn this path to holiness,” he said.

Citing a long list of men and women described in the New Testament as co-workers with St. Paul, the pope focused specifically on three of the apostle’s closest collaborators – Barnabas, Silas and Apollos – and on the fact that they never acted alone, but always as part of the community.

Pope Benedict told the estimated 6,000 people gathered for the audience, “It also seems important to me that Paul does not act as a ‘soloist,’ simply as an individual, but together with these collaborators.”

Citing a passage from the First Letter of Paul to the Corinthians, the pope said that today, as in the early Christian community, those who preach the Gospel are simply God’s messengers; it is God who makes faith grow.

“This word is valid today as well. All of us – pope, cardinals, bishops, priests and laity – we are all humble ministers of Jesus,” the pope said. “We serve the Gospel as best we can in accordance with our gifts, and we pray to God that he, today, would make his Gospel, his church grow.”

At the end of the audience, the pope greeted more than 500 pilgrims from seven dioceses in Italy’s Liguria region who were accompanying their bishops on their “ad limina” visits to the Vatican.

The pope asked the laypeople to be increasingly conscientious about their role in the church.

“The flame of the faith, which you have received in baptism, must be kept burning with prayer and reception of the sacraments; it must shine through your words and your example to allow everyone to draw light and spiritual warmth from it,” he said.

Pope Benedict told them they need a “renewed apostolic boldness” to face the challenges of the modern world and to bring to others “the saving message of Christ in its entirety.”