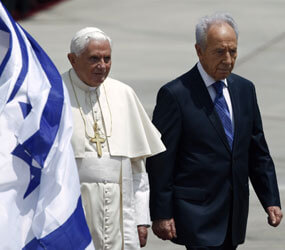 JERUSALEM – Reaching Israel, the country at the heart of his pilgrimage to the Holy Land, Pope Benedict XVI condemned anti-Semitism and prayed for a new era in which all believers in the one God would live in peace and treat each other with respect and justice.

In his arrival speech May 11 at Ben Gurion airport in Tel Aviv, the pope prayed that Isaiah’s prophecy would be fulfilled and all the peoples of the world would walk along God’s paths – “paths of peace and justice, paths that lead to reconciliation and harmony.”

The pope was welcomed at the airport with warm handshakes from Israeli President Shimon Peres and Prime Minister Benjamin Netanyahu, as well as the greetings of other government officials and representatives from Israel’s Christian, Jewish and Muslim communities.

From the moment he arrived, the German-born pope honored the memory of the 6 million Jews killed by the Nazis during World War II and condemned anti-Semitism, which “continues to rear its ugly head in many parts of the world.”

“This is totally unacceptable,” he said.

Pope Benedict told the leaders, “I come, like so many others before me, to pray at the holy places, to pray especially for peace – peace here in the Holy Land, and peace throughout the world.”

The pope said that although Jerusalem means “city of peace,” unfortunately, “for decades peace has tragically eluded the inhabitants of this holy land.”

“The eyes of the world are upon the peoples of this region as they struggle to achieve a just and lasting solution to the conflicts that have caused so much suffering,” Pope Benedict said.

As he had said in Jordan on the first leg of his trip, Pope Benedict told Israelis that peace and justice in the region require respect for the religious identity of each person, guaranteed access to their holy sites and an acknowledgment of the right of both Israelis and Palestinians to live in peace “in a homeland of their own within secure and internationally recognized borders.”

Speaking at the airport, Peres told the pope he saw the papal trip as “an important spiritual mission of the highest order: a mission of peace; a mission of planting seeds of tolerance and uprooting the weeds of fanaticism.”

The president said, “We have made peace with Egypt and Jordan, and we are in negotiations to make peace with the Palestinians; we may also arrive at a comprehensive regional peace in the near future.”

Seeing the pope off at the airport in Amman that morning, Jordan’s King Abdullah II said, “It is vital to make justice real for those who suffer today, whether from occupation, deprivation or disrespect.”

“For too long the Middle East has been entangled in conflict,” the king told the pope. “The Palestinian people, in particular, have suffered under occupation and its evil. It is time this situation ended through a settlement that will guarantee the Palestinians their rights to freedom and statehood and give Israelis the acceptance and security they need.”

The king said, “The two-state solution” – fully independent and recognized nations for Israelis and for Palestinians – “enjoys the support of the international community precisely because it offers the only promise of lasting peace.”

As he began his visit to Israel and the Palestinian territories, Pope Benedict had a special word of encouragement for the area’s Christian communities “By your faithful witness to him who preached forgiveness and reconciliation, by your commitment to uphold the sacredness of every human life, you can make a particular contribution to ending the hostilities that for so long have afflicted this land,” the pope said.

In a region marked by the continuing emigration of Christians, the pope told Catholics of the Holy Land, “I pray that your continuing presence in Israel and the Palestinian territories will bear much fruit in promoting peace and mutual respect among all the peoples who live in the land of the Bible.”