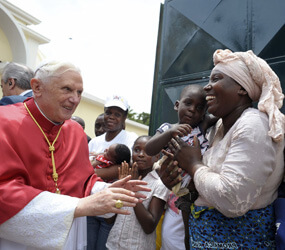 LUANDA, Angola – Pope Benedict XVI’s in-flight statement opposing condom distribution in AIDS prevention drew sharp criticism and was seen by many as a distraction from his main message in Africa.

But a closer look reveals that very little of what the pope had to say during his March 17-23 African journey was easy or accommodating. On issues ranging from abortion to corruption, from women’s rights to economic development, he preached the Gospel in a way that took issue with common practices and prevailing attitudes.

His conviction, expressed on his first day in Cameroon, is that Christianity is the answer – the only real answer – to the chronic problems plaguing Africa. His fear is that Africa, caught up in economic and cultural globalization, will follow the secularized West and lose touch with its own best values.

Condom campaigns are, to Pope Benedict, a small but very real part of this threat. But his concern extends to virtually every area of social, economic and political life.

“At a time when so many people have no qualms about trying to impose the tyranny of materialism, with scant concern for the most deprived, you must be very careful,” he told Africans in Cameroon.

“Take care of your souls,” he said. “Do not let yourselves be captivated by selfish illusions and false ideals.”

News accounts usually leave out the words than inevitably followed these papal warnings, but for the pope they were the most important part of his message in Africa: “Only Christ is the way of life.” “The Lord Jesus is the one mediator and redeemer.” “Christ is the measure of true humanism.”

The transformation the pontiff asked of Africans was, as he described it, one that must begin with a radical conversion to Christ that redirects every aspect of life.

The pope kept reminding listeners that, in his view, inside and outside Africa the Christian message lived to the full is profoundly countercultural.

That was eminently clear when he addressed young people in an Angolan soccer stadium, telling them that their power to shape the future was directly dependent on their “constant dialogue with the Lord.”

“The dominant societal culture is not helping you live by Jesus’ words or to practice the self-giving to which he calls you,” he said. In fact, he said, today’s “individualistic and hedonistic” values prevent young people from reaching maturity.

Abortion was very much on the pope’s mind in Africa. His first speech on the continent reminded Africans of their traditional values and said the church was the institution best able to preserve and purify them – unlike agencies that want to impose “cultural models that ignore the rights of the unborn.”

The pope hit hard on African wars and ethnic conflicts and repeatedly held out Christianity as the answer. If Africans grasp that the church is “God’s family,” he said in Cameroon, there is no room for ethnocentrism or factionalism. In effect, he presented the church as the only institution capable of bringing Africans together in a way that goes beyond political or economic expediency.

Although the pope had two one-liners about corruption, he did not engage in finger-pointing. The reason is that he knows local African church leaders are already on the front lines in denouncing political corruption.

Significantly, the pope treated corruption not as a problem to be eliminated in return for foreign aid, but as a practice incompatible with the demands of the Gospel.

The pope’s method in Africa was not to lay down the law but to lay down a challenge, asking people to examine their own lives and their relationships in the light of the Gospel. He believes that Christianity is a perfect fit for Africa but that, in view of cultural trends, it won’t necessarily be an easy fit.