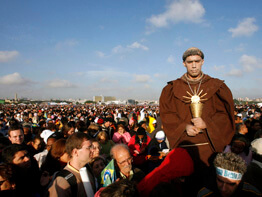 At an outdoor Mass May 11, the pope read a decree proclaiming sainthood for Father Antonio Galvao, prompting a surge of applause among the hundreds of thousands of people who gathered at a Sao Paulo airfield for the liturgy.

As the saint’s relics were brought in procession to the altar, the crowd sang and waved banners and flags in the sunshine. In the front row, wearing bright blue habits, were Conceptionist nuns, whose order used St. Galvao as a spiritual adviser in the late 1700s.

In his homily, which the pope read in Portuguese, he said St. Galvao, who died in 1822, was a model of Christian charity and service in Brazil, especially toward the poor and sick. He was sought out as a confessor and inspired people by his attitude of constant devotion to God, the pope said.
“The renown of his immense charity knew no bounds. People from all over the country went to Frei Galvao, who offered a fatherly welcome to everyone,” the pope said.

The pope did not mention a unique and popular form of devotion begun by St. Galvao, in which people seeking cures are given tiny rice-paper pills inscribed with a prayer, which they ingest.

Although the church hierarchy has not encouraged the practice, the “miracle pills” are distributed today by the cloistered nuns at the monastery where the saint is buried and have been credited by devotees with thousands of healings.

The pope said St. Galvao reminded people above all of the importance of God in their lives. That has significance for those seeking social progress and justice today, he said.

“Will the men and women of this world be able to find peace if they are not aware of the need to be reconciled with God, with their neighbor and with themselves?” the pope asked.

He said St. Galvao’s devotion to Mary and his commitment to purity and virtue are also exemplary in a modern age “so full of hedonism.”

“The world needs transparent lives, clear souls, pure minds that refuse to be perceived as mere objects of pleasure. It is necessary to oppose those elements of the media that ridicule the sanctity of marriage and virginity before marriage,” the pope said.

Those words prompted one of the strongest bursts of applause during the homily.

The pope said that today Mary remains “the best defense against the evils that afflict modern life.” He encouraged Marian devotion, saying: “There is no fruit of grace in the history of salvation that does not have as its necessary instrument the mediation of Our Lady.”

The pope closed his sermon by quoting from a talk he gave to young people in 2005: “Only from the saints, only from God does true revolution come, the definitive way to change the world.”

On his flight to Brazil, the pope listed the canonization as one of the highlights of his trip and said he hoped the new saint would stand as a model for those who want to create peace and social harmony.