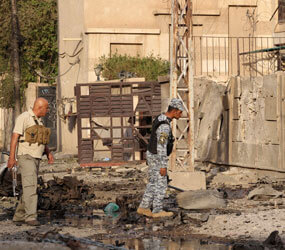 The pope urged international and national authorities and all people of good will to work together to end the “heinous episodes of violence that continue to ravage the people of the Middle East.”

“In a very grave attack on the Syrian Catholic cathedral of Baghdad, dozens of people were killed and injured, among them two priests and a group of faithful gathered for Sunday Mass,” the pope said of the Oct. 31 incident.

“I pray for the victims of this absurd violence, which is even more savage because it struck defenseless people, gathered in God’s house, which is a house of love and reconciliation,” he said after praying the Angelus with pilgrims in St. Peter’s Square Nov. 1, the feast of All Saints.

He expressed his closeness to Iraqi Christians, who have suffered another attack in their homeland, and he encouraged the nation’s priests and lay faithful “to be strong and steady in hope.”

Pope Benedict renewed his urgent call for peace in the Middle East.

While peace may be a gift of God, “it is also the result of efforts by people of good will and national and international institutions,” he said.

“May everyone unite their efforts so as to end all violence,” he said.

The terrorists first set off a car bomb across the street in front of the Baghdad Stock Exchange, which left at least two people dead. Then they stormed the church, killing another two people, according to reports.

The militants, who said they were part of the Islamic State of Iraq – a group with suspected ties to al-Qaida – held parishioners and priests hostage in the hopes of leveraging the release of prisoners from their network.

The terrorists demanded prisoners linked to al-Qaida be set free from detention in Iraq and Egypt and they threatened to blow up the church if military forces attempted to break the siege, according to Italian state media RAI.

After a standoff that lasted hours, Iraqi forces stormed the cathedral and the ensuing firefight and a series of explosions left a large number of people dead and injured.

The Associated Press reported Nov. 1 that at least 39 people were killed, which included hostages, Iraqi security forces and suspected militants. Other agencies were reporting 52 people dead and 56 people wounded.

During the siege, he asked people to pray that God would give the hostage-takers the grace to take into consideration the women, children and all the innocent who were threatened by their actions.

Vatican spokesman Jesuit Father Federico Lombardi told reporters at the time of the siege that “it’s a very sad situation, which confirms the difficult situation in which Christians live in the country.”

“Christians live with great insecurity and we express our solidarity with them,” he said.

Iraqi bishops had just participated in a special Synod of Bishops Oct. 10-24 with the pope at the Vatican; the synod drew attention to the challenges facing Christians in the Middle East.

During the synod, Iraqi bishops said kidnappings for ransom, bombings of churches and other Christian buildings and a general lack of security have made life so precarious for the vulnerable Christian community that about half have left their homeland for safer destinations in the past seven years.

At least one bishop raised the question of systematic attacks as part of a “plan” to drive all Christians from the Middle East.

The cathedral and four other churches were the target of a string of bombings Aug. 1, 2004, when parishioners were leaving Sunday Mass; 15 people were killed in those attacks.