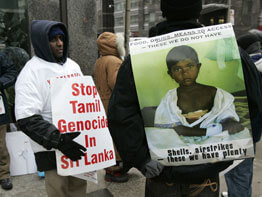 VATICAN CITY – Pope Benedict XVI called for the protection of innocent civilians caught up in an increasingly bloody conflict in Sri Lanka.

He appealed to those fighting the war to respect “humanitarian law and peoples’ freedom of movement.”

He urged the combatants to “do everything possible to guarantee assistance to the injured and civilians’ safety and allow urgent food and medical needs to be satisfied.” The pope spoke Feb. 4 during his weekly general audience at the Vatican.

Church sources estimated that 490,000 people were trapped and hundreds of civilians have been killed or injured by the intensified fighting between government forces and the Liberation Tigers of Tamil Eelam trying to retain their last stronghold.

Pope Benedict said “news of increasing cruelty of the conflict and the growing number of innocent victims persuaded me to make an urgent appeal to combatants,” urging them to follow humanitarian law and better protect civilians’ basic rights.

He prayed that peace and reconciliation would come soon “to that dear country.”

Meanwhile, Catholic officials in the Diocese of Jaffna appealed to the Sri Lankan government and Tamil rebels to stop attacks on civilians and church centers.

The appeal Jan. 31 called for human rights activists and the international community to intervene to ensure civilians’ safety in the ongoing war, the Asian church news agency UCA News reported Feb. 3. The appeal said that, even though the government had announced a 48-hour period to allow people safe passage out of the war zone, no logistics were worked out for such passage.

The appeal was sent by the diocesan Justice and Peace Commission and the local branch of the Catholic aid agency Caritas. It was contained in a letter to the government and the Tamil rebels, and a copy was sent to the United Nations, UCA News reported.

Father Christopher George Jayakumar, director of the local Caritas office, said the Jan. 29 attack on his center in Mullaittivu, southeast of Jaffna, destroyed $526,000 worth of relief items. At the time, 60 church workers were distributing relief items and narrowly avoided injury, he said.

On the day of the attack, 28 civilians were reported killed and another 60 were injured in the war zone, UCA News reported.

The Tamil rebels launched their armed struggle in 1983 to create an independent state for minority Tamils, claiming decades of systematic discrimination under successive governments led by the Sinhalese ethnic majority. The conflict has claimed 80,000 lives.

Father William Collins of the Jaffna diocesan staff said Feb. 2 that protest fasts and prayers will continue at all churches in the Jaffna peninsula, the northern tip of Sri Lanka, which is outside the war zone. Anglicans and Hindus also have begun organized fasts in the north in protest, UCA News said.