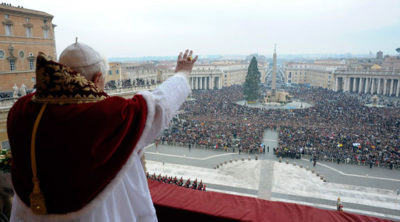 VATICAN CITY – Pope Benedict XVI celebrated Christmas with a call to peace and a plea on behalf of the world’s children.

In the face of violent conflicts, child exploitation and economic woes, the pope said, the birth of Jesus brings a light that “breaks through the gloom” and urges a mentality of solidarity with others.

In his Christmas message, the pope said a more generous and sharing attitude was essential to overcoming global problems, including terrorism, human rights violations and apprehension about “an increasingly uncertain future … even in affluent nations.”

“If people look only to their own interests, our world will certainly fall apart,” he said.

The pope spoke from the central balcony of St. Peter’s Basilica, delivering a blessing “urbi et orbi” (to the city of Rome and the world) and pronouncing Christmas greetings in 64 languages. In English, he said: “May the birth of the Prince of Peace remind the world where its true happiness lies; and may your hearts be filled with hope and joy, for the Savior has been born for us.”

The 81-year-old pontiff looked fit and sounded good as he made his way rapidly through the multilingual salutations, which included Chinese, Arabic and Swahili. He had been up late, celebrating a midnight Mass in St. Peter’s Basilica that ended at 2 a.m.

In his Christmas message, the pope said it was important to remember that Jesus came with saving grace not for a few but “for all: Jews and Gentiles, rich and poor, those near and those far away, believers and nonbelievers.”

This grace is sorely needed today, he said, in places like the Holy Land, where “the horizon seems once again bleak for Israelis and Palestinians”; in Lebanon, Iraq and the rest of the Middle East; and in many other places where “the twisted logic of conflict” reigns.

The grace of Christ is sought by the people of Zimbabwe, “trapped for all too long in a political and social crisis which, sadly, keeps worsening,” he said, referring to the African country’s recent cholera outbreak and continuing political and economic unrest.

The pope highlighted what he called the “interminable sufferings” of people in the war-torn region of Darfur in Sudan and in Somalia, as well as the escalation of fighting in Congo. In a special way, children in these places need the light of Christ and the return of hope for their future, he said.

During midnight Mass the pope, dressed in white and gold vestments, accepted the offertory gifts from young children of different countries, blessing each of them as they made their way to the altar.

In his sermon, he said the arrival of the savior as a child should remind people everywhere of the suffering of children, including those denied the love of their parents and those who have been abused.

“Let us think of those street children who do not have the blessing of a family home, of those children who are brutally exploited as soldiers and made instruments of violence, instead of messengers of reconciliation and peace,” he said.

“Let us think of those children who are victims of the industry of pornography and every other appalling form of abuse and thus are traumatized in the depths of their soul,” he said.

He said the infant Jesus “summons us once again to do everything in our power to put an end to the suffering of these children.” The world will change for the better only when people accept Jesus and experience a change of heart, he said.

After the liturgy, the pope walked in procession down the main aisle of the basilica, smiling and blessing the faithful. At one point, the Vatican’s chief security agent tackled a woman who had moved past the wooden barriers and appeared to be rushing toward the pope. The Vatican later said there was no danger to the pontiff.

On Christmas Eve, the pope lit a candle at his apartment window after the Vatican’s larger-than-life Nativity scene was unveiled in St. Peter’s Square below. This year’s Nativity scene featured representations of domestic settings from the period, alongside Jesus’ manger in Bethlehem.