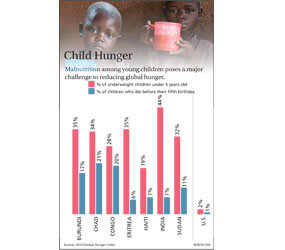 The pope made the comments in his message for World Food Day, which is celebrated Oct. 16. The text was addressed to Jacques Diouf, director-general of the U.N. Food and Agriculture Organization.

The pope said the theme of this year’s day, “United Against Hunger,” should remind everyone of the responsibility to support the agricultural sector. Freedom from hunger, he said, means ensuring not only that enough food is available, but also that everyone has daily access to it.

“This means promoting whatever resources and infrastructures are necessary in order to sustain production and distribution on a scale sufficient to guarantee fully the right to food,” he said.

The pope praised recent international steps to protect the right to safe water, which he said was “essential to human nutrition, to rural activities and to the conservation of nature.”

He said the deterioration of climatic and environmental conditions requires additional funding so that agricultural production cycles can be reestablished. The climate and environmental problems have a big negative impact on rural populations and crop systems, he said.

The pope said all food assistance should be provided in the context of broader human development. He warned of a tendency to limit such development to the satisfaction of material needs, and said it must also include the higher values of fraternity, solidarity and the common good.