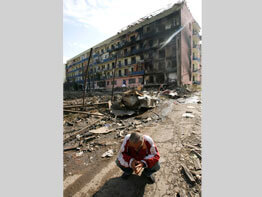 BRESSANONE, Italy – Pope Benedict XVI appealed for an immediate end to military operations in Georgia and its breakaway province of South Ossetia.

Citing reports of heavy civilian casualties and a large number of refugees, the pope called on the international community to act quickly to bring Russian and Georgian leaders to the bargaining table.

“It is my fervent wish that military actions cease immediately,” the pope said Aug. 10.

He urged both sides to “refrain, also in the name of a common Christian heritage, from further confrontations and violent retaliations that could degenerate into a wider conflict.”

The pope made the remarks in the northern Italian city of Bressanone, where he was ending a two-week vacation. Vatican sources said he was following the swiftly moving events in the Caucasus region, where a Georgian army operation in South Ossetia Aug. 8 prompted a heavy Russian retaliation that extended far into Georgian territory.

The pope expressed his “deep anguish” at the fighting so far, which he said already had led to dramatic and tragic consequences. He said it was important to resume the process of respectful and constructive dialogue and spare the civilian population “additional painful suffering.”

“I also invite the international community and the countries most influential in the current situation to make every effort to sustain and promote initiatives aimed at reaching a peaceful and lasting solution, one which favors open and respectful coexistence,” he said.

The pope said he was praying along with Orthodox Christians, who form the majority of the populations in Georgia and Russia, so that peace will come to the region.

In a separate comment, the Vatican spokesman, Jesuit Father Federico Lombardi, said the Vatican was concerned deeply about the explosion of violence in Georgia. He said the Caucasus region has proven itself to be an area where long-standing tensions can re-emerge even after years of relative calm.

South Ossetia, which borders Russia on the north, broke away from Georgia in the 1990s and has been run by an autonomous government since then, although its independence has never been recognized by the United Nations.

In recent years, Georgia has engaged in a military buildup in the area, and its current action was apparently aimed at reasserting control over the province.

Archbishop Claudio Gugerotti, apostolic nuncio to Georgia, told Vatican Radio Aug. 11 that the people of the region “are suffering atrociously” and the situation could become horribly worse.

“There is a need for a stable peace here because it is a fuse that could make an entire continent explode,” the archbishop said.

“I make an appeal, which is also a prayer, a supplication to the Lord and to all people of good will … that they understand how this kind of war produces only destruction and places at risk the poorest and weakest,” he said.

Caritas Internationalis, the Vatican-based umbrella organization for national Catholic charities around the world, reported Aug. 11 that thousands of people have died and tens of thousands have been driven from their homes in the conflict.

Caritas partners in the region are responding by providing food, shelter and counseling to the survivors and the displaced, the international office said. In addition, as casualties threaten to overwhelm hospitals in Tbilisi, Georgia’s capital, Caritas Georgia is attempting to assist with medical care.

Caritas Georgia program manager Liana Mkheidze said: “Many people are coming to Tbilisi from Georgian villages around Ts’khinvali and … from Gori. Their houses have been damaged and they’re escaping the bombardment.”

In addition to distributing canned food, she said, the organization is baking bread in its own bakery and distributing that to the displaced, and Caritas soup kitchens are expanding their programs to meet the increased demand caused by the fighting.

The director of Caritas offices in the Russian region North Ossetia, Sergey Basiev, said: “There are lots of refugees seeking shelter. They have nothing. The situation is dreadful. We will try to meet these urgent needs.”