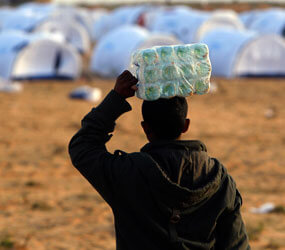 VATICAN CITY – As fighting between rebels and government forces in Libya intensified, Pope Benedict XVI called for aid and assistance to civilians caught in the conflict.

“Recent clashes have caused many deaths and an increasing humanitarian crisis” in Libya, the pope said after praying the Angelus with pilgrims gathered in St. Peter’s Square March 6.

He expressed his concern over the growing crisis and said his prayers were with all victims and “those who find themselves in distress.”

“I appeal for assistance and aid for the people who are hit” by the crisis, he said.

More than 1,000 people were believed to have died in the two weeks after pro-democracy protests began in mid-February. A violent crackdown on the popular movement also triggered a large exodus of people, including migrants; more than 100,000 people were said to have fled to Egypt and Tunisia.

Rebels opposed to the 42-year rule of Col. Moammar Gadhafi tried to take control of cities in the country’s western and eastern regions, and forces loyal to the Libyan dictator launched aerial bombing raids in a counteroffensive.

Bishop Giovanni Martinelli of Tripoli, Libya, said there were clashes “in the mosque after prayers in central Tripoli” March 4, but that most of the capital is currently “well-guarded” by government forces.

However, “the situation is very uncertain and for the moment anything is possible,” Bishop Martinelli told Fides, the news agency of the Congregation for the Evangelization of Peoples.

“In my view, the international embargo and threats are unlikely to convince the Libyan authorities to surrender,” he said.

“I still believe in the possibility of dialogue to find a way out,” he added.

Meanwhile, Catholic aid agencies mobilized to provide assistance to some of the tens of thousands of foreign and migrant workers fleeing the violence who gathered along the Libyan-Tunisian border.

A spokesman for Jesuit Refugee Service, which runs a major operation in Malta for refugees from North Africa, said the agency was assessing how best to respond to the crisis at the border.

Caritas Internationalis and Catholic Relief Services planned to start distributing 2,000 meals and 3,000 bottles of water at the eastern border March 7. The effort was expected to reach 5,000 people stranded at the crossing into Salloum, Egypt.

The agencies planned to have their own distribution network established by March 10, said a CRS spokeswoman.

The effort is being coordinated by the U.N. High Commissioner for Refugees and the International Organization for Migration.

Many of those fleeing from Libya into Tunisia at Ras Ajdir reported being intimidated and having their mobile phones and cameras confiscated. In all, more than 213,000 foreign workers have fled Libya since mid-February when the uprising began.

Contributing to this story was Dennis Sadowski in Washington.