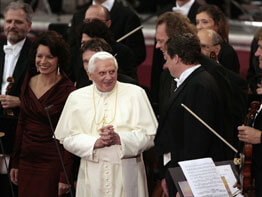 VATICAN CITY – After listening to a performance of Ludwig van Beethoven’s “Ninth Symphony,” Pope Benedict XVI called the work a masterful expression of optimism in the face of suffering.

The pope listened to the performance by the Bavarian Radio Symphony Orchestra and Chorus at the Vatican Oct. 28. Afterward, he gave a talk that reflected his interest in music and his familiarity with Beethoven’s work.

Beethoven’s “Ninth” is one of the best-known compositions of Western music and was written when the composer was almost completely deaf. Its finale, “Ode to Joy,” uses soloists, chorus and orchestra.

The pope said he was increasingly amazed at the work, which was Beethoven’s last complete symphony, written after years of self-isolation.

“Beethoven had to fight internal and external problems that brought him depression and deep bitterness and threatened to suffocate his artistic creativity,” the pope said.

Then, in 1824, Beethoven surprised the public with “a composition that broke the traditional form of the symphony” and elevated it to an expression of joy and optimism, he said.

The pope said the careful listener can follow this drama in the music itself, as it progresses from the dark tones and famous “empty fifths” of the strings at the beginning of the overture to an explosion of jubilation at the end.

The sense of joy that emerges from the music is “not something light and superficial, but a sentiment acquired through much work, overcoming the emptiness of someone who had been pushed into isolation by deafness,” the pope said.

He said the musical composition reminded him of a passage from the prophet Isaiah: “On that day the deaf shall hear the words of a book; and out of gloom and darkness the eyes of the blind shall see.”

He said the reference is to the gift of perception received by those who are liberated from struggles through God’s grace.