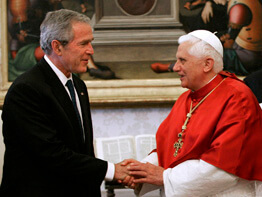 VATICAN CITY – Meeting for the first time, Pope Benedict XVI and U.S. President George W. Bush spoke about the precarious situation of Christians in Iraq and a wide range of other foreign policy and moral issues.

The pope and president looked relaxed as they greeted each other and spoke briefly before reporters before their 35-minute private encounter June 9. Bush later held a separate 40-minute meeting with the Vatican’s top foreign policy officials.

A Vatican statement described the meetings as “cordial” and said they had focused in part on “the worrisome situation in Iraq and the critical conditions in which the Christian community finds itself.” Tens of thousands of Christians have fled Iraq over the last four years to escape violence and discrimination.

The talks also touched on the overall situation in the Middle East, including the Israeli-Palestinian conflict and developments in Lebanon.

“The Holy See again expressed the hope for a `regional’ and `negotiated’ solution to the conflicts and crises that are tormenting the region,” the Vatican statement said.

Bush and the pope also discussed problems in Africa, the humanitarian crisis in Darfur and developments in Latin America, it said.

“Finally, there was an examination of current moral and religious questions, including those related to human rights and religious freedom, the defense and promotion of life, marriage and the family, education of new generations and sustainable development,” the Vatican said.
Before the president’s visit, the Vatican secretary of state, Cardinal Tarcisio Bertone, went out of his way to praise Bush for his position on abortion and for “positive initiatives in favor of the defense of life from conception.”

Bush arrived at the Vatican under very heavy security. His motorcade entered St. Peter’s Square from a side street instead of along Via della Conciliazione, the wide avenue leading to the Vatican, which had been cleared of cars and was lined with curious onlookers.

In the sunny St. Damasus Courtyard, the president was greeted by U.S. Archbishop James Harvey, one of the pope’s private secretaries, who escorted him past a picket of Swiss Guards and up an elevator to the fourth floor of the Apostolic Palace for the papal audience.

The pope smiled broadly as he greeted Bush just outside his private library. The two men shook hands, and the pope ushered the president to a large desk. Reporters and photographers were allowed to stay for the first minute of the encounter.

“It’s good to be with you sir,” Bush said as he sat down opposite the pope, crossing his legs and leaning back in a white chair.

“You come from the conference in Heiligendamm?” the pope said, referring to the G8 meeting in Germany.

“I did, your old country. And it was successful,” the president replied.

“Successful? You had some decisions? It’s not so easy,” the pope said. He said it was important for humanity that conferences like this produce decisions.

“It was, you know, a lot of different opinions. But it was good. It was good,” Bush said.

The president paused as photographers kept snapping photos and said: “I’ll tell you in a minute.” Both men laughed. Putin and Bush had sparred over a U.S. proposal to build a missile defense system in Europe.

Bush then went on to tell the pope that he had recently asked Congress for $30 billion toward fighting the global AIDS crisis, a doubling of the previous U.S. commitment.

After reporters left, the two leaders met privately without aides or interpreters. When the doors of the library opened, Bush’s entourage was led into the room and the president introduced them one-by-one to the pope. The pontiff handed each of them a medallion. Among those greeting the pontiff was Karl Rove, Bush’s top political adviser.

The pope and the president also exchanged gifts. Bush gave the pope a long wooden stick with a design representing the Ten Commandments. When the pope picked it up, Bush told him it had been made by a former homeless man in Dallas.

“The Ten Commandments?” the pope asked, looking at the inscriptions.

The pope presented Bush with an engraving of St. Peter’s Basilica and a gold medallion of his pontificate. The president put on his glasses to give it a closer look and remarked: “It’s beautiful, thank you very much.”

The Vatican’s concern about Iraq was underlined in another way during the Bush visit. As the president and the pope ended their meeting, the Vatican released a statement by the newly nominated prefect of the Congregation for Eastern Churches, Archbishop Leonardo Sandri, who said many Eastern-rite Catholics were suffering in Iraq, Lebanon and elsewhere because of “war, violence or fear of an uncertain future.”

“I think also of those who must leave their homeland and everything they own,” Archbishop Sandri said. Church officials have been increasingly distressed at the exodus of Iraqi Catholics following the U.S.-led invasion of Iraq in 2003.

The last time Bush came for a papal audience, in 2004, Pope John Paul II told him of his deep concern for the situation in Iraq and reminded the president of the “unequivocal position” taken by the Vatican against the war.

During his first term, Bush met three times with Pope John Paul, twice at the Vatican and once at the papal villa outside Rome.

Before coming to see Pope Benedict, Bush told reporters that he would be in a “listening mode” when he met the 80-year-old pontiff. He said a papal audience was always a “moving experience.”

“Sometimes I’m not poetic enough to describe what it’s like to be in the presence of the Holy Father,” Bush said.

In comments to reporters after his meeting with the pope, Bush said the pope was “deeply concerned” about Christians in Iraq and feared that they were “being mistreated by the Muslim majority.”

The pope “was concerned that the society that was evolving would not tolerate the Christians religion,” Bush said during a joint press conference with Prime Minister Romani Prodi at Chigi Palace, the seat of Italy’s government.

“I assured (the pope) we were working hard to make sure” Iraqis would respect “that modern constitution voted on by the people that would honor people from different walks of life and different attitudes.”

“He’s watching the immigration debate very closely in America and I told him I was a person who strongly supports comprehensive immigration reform that, on the one hand, we will enforce our law and, on the other hand, we need to treat people with dignity,” Bush said.

In a separate meeting immediately after Bush met with Pope Benedict, leaders of Rome’s Sant’Egidio Community told the president of their concern for Iraq’s Christians.

The president of the Catholic lay community, Marco Impagliazzo, told reporters they told Bush the Christians in Iraq were suffering and risked becoming an enclave in the North of the country.

Bush “did not respond” with any comments, Impagliazzo told reporters.

The head of Sant’Egidio said Bush told them the pope wanted the United States “to play a leading role against suffering” in the world to which Bush was reported to have replied “and we’ll do it.”

Contributing to this story was Carol Glatz in Rome.