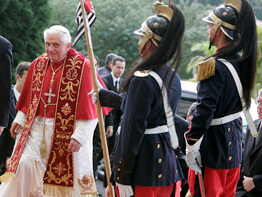 Before the meeting, some analysts speculated that the president would try to steer the conversation away from abortion, which was in the news in Brazil in the days before the pope’s visit. A Vatican spokesman said the issue did not come up during the meeting, which lasted more than half an hour and was attended by first lady Marisa Leticia da Silva.

Da Silva mentioned his concerns about the problems of youths and young adults; more than 60 percent of the Brazilian population is under age 29. Pope Benedict and da Silva agreed that moral formation for young people must be a priority, and the president called for greater collaboration between church and state in that area.

The president also highlighted the Catholic Church’s support for peace and social and human development in Brazil. The church’s ministry for infants is credited with lowering malnutrition rates, especially in rural parts of the country, while other church offices address land rights for peasant farmers and issues related to indigenous peoples, Afro-Brazilians and young people.

While greeting public officials at the president’s residence, Pope Benedict spoke with Sao Paulo Gov. Jose Serra’s 4-year-old grandson, blessed him and gave him a rosary.

The Brazilian president’s official gift to the pontiff was a 13-volume set of books containing the complete works of Brazilian painter Candido Portinari. The first lady presented the pope with a portrait by Brazilian artist Roberto Camasmie. A postage stamp commemorating the pope’s visit also was released.

The meeting was the pope’s first official event following his arrival in Sao Paulo the previous day. About 500 people gathered outside St. Benedict Monastery to cheer the pontiff as his motorcade departed for the presidential palace; few people lined the streets along the papal route, however.