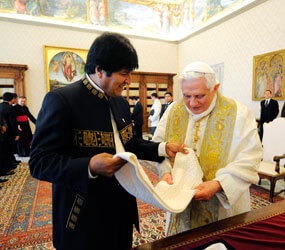 VATICAN CITY – Pope Benedict XVI and Bolivian President Evo Morales, meeting at the Vatican May 17, discussed the need to protect the environment.

During the 25-minute encounter in the pope’s library, the two leaders held “cordial talks” concerning international and regional issues as well as “the need to develop greater awareness in society about protecting the environment,” said a written statement released by the Vatican.

They also discussed issues of common concern regarding life in Bolivia, particularly the need for the church and government to work together on education, health care and social policies defending the rights of the country’s weakest members, said the statement.

Morales, Bolivia’s first indigenous president, told reporters after the papal audience that he gave the pope a letter in which he called for the abolition of mandatory celibacy for priests and for the ordination of women.

Morales said he “respectfully” made the suggestions in his letter, which he later gave to reporters.

“It is imperative to democratize and humanize the clerical structure” of the church and to allow women to “have the same opportunities as men to fully exercise the priesthood,” the letter said.

Regarding human sexuality, he wrote, “The church should not deny a fundamental part of our nature as human beings and must abolish celibacy. This way there would be fewer daughters and sons who are not recognized by their fathers.”

Morales said he invited the pope to Bolivia and urged him to support his environmental initiatives.

Morales, who was named “World Hero of Mother Earth” by the U.N. General Assembly in 2009, hosted an international conference on climate change and the “rights of Mother Earth” in Bolivia in April.

He recently launched a campaign to establish a “Mother Earth Ministry” for promoting environmental safeguards, he has called for the establishment of an international court of “climate justice,” and he has pledged to plant 10 million trees – equivalent to Bolivia’s population – by April 2011.

Morales told reporters that the pope wanted to hear what was happening in Bolivia.

As gifts, the Bolivian president gave the pope two small wooden statues depicting indigenous farmers – one male and one female – and he gave the pope a white, cable-knit scarf made of Andean alpaca hair.