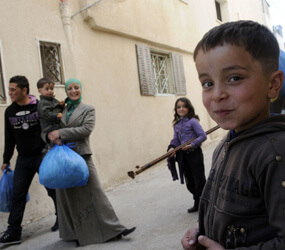 JERUSALEM – Pope Benedict XVI will encounter a Holy Land that has changed greatly since Pope John Paul II visited in 2000.

Pope John Paul arrived in Israel and the Palestinian territories when, despite stumbling blocks in the peace process, the jubilee year celebrations seemed to buoy the Holy Land with a booming tourism industry.

But Pope Benedict will visit amid continued Israeli-Palestinian tensions – months after a controversial Israeli invasion of Gaza and during continuing Palestinian rocket attacks against southern Israeli towns.

On his visit to Bethlehem, West Bank, Pope John Paul was received by a united Palestinian Authority, led by longtime Palestinian leader Yasser Arafat. In May Palestinian President Mahmoud Abbas, who is struggling to unite the Palestinian factions following a 2007 split with the Islamic fundamentalist political party and militia Hamas, will welcome Pope Benedict.

Israel’s recent election brought to power a conservative government whose new foreign minister declared in his first public speech that the U.S.-sponsored 2007 Annapolis peace declaration – which calls for two states, Israeli and Palestinian – has “no validity.”

The new Israeli government also has an interior minister from the religious Shas party; when a Shas official held that position in previous governments, he limited the issuance and renewal of entry and residence permits for Christian clergy. Despite numerous protests to rectify the situation, clergy are still struggling with visa and permit issues.

Pope Benedict will face a land torn asunder and scarred by the violence and physical barriers of the second intifada, which broke out just months after the 2000 papal visit. He will stand before people who have lost hope in the future and no longer trust their politicians, and he will see precarious economies still reeling from the effects of the intifada and feeling the sting of the current international economic downturn – still waiting for the additional influx of pilgrims and tourists they dreamed of following the earlier papal visit.

Yvonne Friedman, a history professor at Israel’s Bar-Ilan University, said that perhaps since people have experienced one papal visit and did not get the expected results, they might have lowered their expectations, and that could actually make for a better visit for Pope Benedict.

Though Pope Benedict has insisted, as did Pope John Paul, that his visit is a spiritual pilgrimage and not meant as a political statement, both Israelis and Palestinians say they have expectations ranging from bringing about a renewal of the stalled peace talks, bringing an economic boost to the area with an influx of pilgrims, helping refocus international attention on the political situation and initiating a spiritual strengthening of the local Catholic faithful.

So while the pilgrimage is planned to follow, almost step by step, the earlier papal visit, in Bethlehem, West Bank, the Palestinian hosts will take Pope Benedict to visit the Aida refugee camp, rather than the larger Dehiyshe camp that Pope John Paul visited. From Aida, the Israeli-built separation barrier surrounding Bethlehem and restricting its residents can be clearly seen. The wall is a stark reminder of the daily struggle Palestinians face just trying to move from place to place.

Israel decided in 2002 to go ahead with plans to build the separation barrier – a series of barbed wire fences, security roads and looming cement slabs which, if completed as planned, would stretch nearly 400 miles and restrict the movements of 38 percent of residents of the West Bank. Israel maintains that the barrier contributed significantly to a decrease in the number of terrorist attacks, while Palestinians contend that the barrier is simply another Israeli land grab, imprisons them and imposes travel limitations.

The pope’s representative to Israel and the Palestinian territories, Archbishop Antonio Franco, has emphasized that Pope Benedict has no intention of making any political statements during his trip. However, in places such as the Aida camp, the pope will find it difficult to keep journalists and others from taking his remarks out from the spiritual realm and putting them into the political arena.

Israelis felt a great deal of affection toward Pope John Paul and viewed him as a friendly pope, citing his openness about childhood friendships with Jewish children, his many statements against anti-Semitism – specifically his apology for historical Catholic persecution – and his condemnations of the Holocaust.

Pope Benedict comes to Israel as a German pope, a member – though unwilling – of the Hitler Youth, and someone who lifted the excommunication of a traditionalist bishop who denied the Holocaust. While the pope’s statements to explain and apologize for the misstep may have calmed the apprehension of some Israeli political and religious leaders, the man on the street remembers the splashing headlines about the pope welcoming the bishop back into the church’s fold.

As did his predecessor, Pope Benedict will visit the Yad Vashem Holocaust memorial, lay a wreath in the Hall of Remembrance and meet with Holocaust survivors. Also like his predecessor, he will not tour the Yad Vashem Holocaust History Museum; this means he will not have to walk by a controversial placard in front of a picture of Pope Pius XII that questions the wartime pope’s lack of actions to save Jewish lives. The sign was put up as a part of the renovations of the museum in 2005 and was not an issue during Pope John Paul’s visit to the Holy Land.