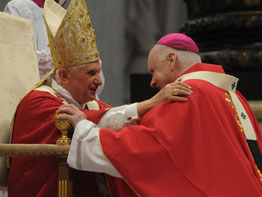 Performed on the feast of Ss. Peter and Paul, the gesture highlighted Archbishop O’Brien’s unity with the Holy Father and his episcopal authority as the metropolitan archbishop of the Province of Baltimore.

Forty-one other metropolitan archbishops appointed to their posts in the last year also received their palliums. They included two Americans, Archbishop John Nienstedt of St. Paul and Minneapolis, and Archbishop Thomas Rodi of Mobile, Ala.

Wearing bright crimson vestments, the archbishops concelebrated a Mass with the Holy Father in a liturgy attended by an estimated 20,000 pilgrims.

“The pallium becomes a symbol of our love for the shepherd, Christ,” and reminds those who wear it to love all people as Jesus does, the pope said. The pallium also symbolizes collegiality and unity among the world’s archbishops and with the pope, he said.

In an interview with The Catholic Review following the ceremony, Archbishop O’Brien called it an “emotional moment” to be “joined in a very special fashion to the pastoral work of the pope as a metropolitan archbishop.”

During the ceremony, the archbishop approached the pope in a single line with other archbishops before reverently kneeling to receive the pallium. The pope smiled and kissed the archbishop on both cheeks in a sign of peace.

Some Americans inside the basilica warmly applauded after Baltimore’s archbishop received the pallium and stood up to return to his seat.

Archbishop O’Brien said he prayed for the people of the Archdiocese of Baltimore and the surrounding area as he received the pallium.

“It’s a great responsibility to be their pastor, but also I realize on a day like this the great graces that are available to all of us – especially with the responsibility I have as archbishop,” he said.

The archbishop said he felt strengthened by a ceremony that took place at the site of the tomb of St. Peter. Because he was one of the first archbishops named in the preceding year, Archbishop O’Brien was selected to read part of the eucharistic prayer while standing beside the Holy Father.

“It was a sacred moment and a solid moment – one that I had to pinch myself to realize that it’s really me,” he said. “I’m really here.”

In an act of ecumenical friendship, Ecumenical Patriarch Bartholomew I of Constantinople participated in the liturgy.

Father Paschal Morlino, O.S.B., one of about 100 pallium pilgrims from Baltimore and other places Archbishop O’Brien has served, said it was a special grace to have the ecumenical patriarch present for the liturgy.

“It shows that the relationship between the East and West is warming,” said Father Morlino, pastor of St. Benedict in Baltimore – a parish that hosts Catholic Byzantine rite liturgies.

Betty Harris, a parishioner of the Cathedral of Mary Our Queen in Homeland, called the pallium liturgy “beautiful – more than beautiful.”

“It was such a wonderful experience to see the Christian community from all over the world come together,” she said.

Monsignor Thomas Tewes, retired pastor of Our Lady of Hope in Dundalk, joined about 25 archdiocesan and religious order priests for the ceremony as a “sign of solidarity” with the archbishop, he said.

“It’s an expression of our support of him and the very exciting way he has been received as our archbishop,” Monsignor Tewes said.

Father Thomas Hurst, S.S., president-rector of St. Mary’s Seminary and University in Roland Park, said Baltimore’s 15th archbishop has brought a “wonderful presence” to his ministry and a special zeal for promoting religious vocations. The priest wanted to show his appreciation for the archbishop by attending the celebration.

The pallium is partially made from the wool of two lambs under 1 year of age. The lambs were raised by the Trappist Fathers of the Abbey of the Three Fountains and were presented to the pope on the feast of St. Agnes, Jan. 21.

Worn by the bishops of Rome since the fourth century, the pallium is a circular band about two inches wide. It has two pendants and is set with six black crosses of silk – one each on the breast and back, one on each shoulder and one on each of the pendants.

Archbishop O’Brien and pilgrims from the Baltimore archdiocese enjoyed greeting the pope personally during an audience June 30.

Asked what message he would like to send to the people of Baltimore after receiving the pallium, Archbishop O’Brien said he was “humbled” to serve them and to have a large number of Baltimore pilgrims attend the ceremony.

“It’s a sign of a deep faith that is there and the faith that we hope to confirm,” he said, praising the clergy, religious and other leaders for their ministry.

“The parishes are so strong and so deeply rooted in our American culture and it’s right there in Baltimore, and it’s kind of a real challenge to continue that tradition; and I pledge myself to that as a result of my appointment and this confirmation of my appointment,” he said.