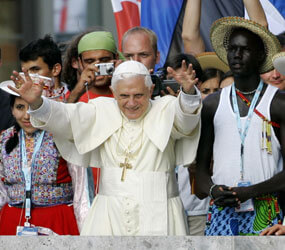 VATICAN CITY – The pope gave the students an “A plus.”

That was the grade awarded by Pope Benedict XVI to the young Catholics who sang “Happy Birthday” to him in German at a gathering with young people at St. Joseph Seminary in Yonkers, N.Y., in 2008.

The incident reveals the warm relationship that Pope Benedict, the former teacher, has enjoyed with young people since his election to the papacy five years ago at age 78. His connection with young adults began as a priest and a theology professor whose lectures were standing-room-only at German universities in Bonn, Munster and Regensburg.

He has continued to nurture young people in the faith after inheriting Pope John Paul II’s legacy of strong relations with young adult Catholics. As Pope Benedict once told President Nicolas Sarkozy during a visit to France, “Young people are my greatest concern.”

Many of the pope’s international travels have included separate meetings with the young people of various nations, including Brazil, Cameroon, the Czech Republic and France.

But the most significant of the pope’s efforts to reach the young has been his presence at the international celebrations of World Youth Day, large-scale events that began 25 years ago and usually take place every three years. They bring together young Catholics ages 15-35 from around the world for a week of prayer, teaching, and fellowship.

Father Eric Jacquinet, who oversees World Youth Day as head of the Youth Section of the Pontifical Council for the Laity, thinks Pope Benedict’s humble but affirming attitude connects with young Catholics.

“He seems to be shy with the crowds, but the pope is very attracted to young people, and he is very present to them,” Father Jacquinet said. “He does not go out and hurl a bunch of ‘thou shalt nots’ at them,” he said.

“Use your head, think it through,” is how Alicia Ambrosia of Vancouver described Pope Benedict’s intellectual approach to presenting the faith. Ambrosia, 28, was a theology student in Rome at the time of the pope’s election in 2005 and covers the papacy for Salt and Light Television in Canada.

Soon after his election in 2005 Pope Benedict went to Cologne, Germany, for his first World Youth Day and addressed nearly 2.5 million young people. He inaugurated a new World Youth Day tradition of evening eucharistic adoration under the stars at an outdoor field. The theme that year was “We have come to worship Him” in honor of the relics of the three kings that are housed in Cologne’s cathedral.

The theme for Sydney’s 2008 World Youth Day, “You will receive power when the Holy Spirit comes upon you, and you will be my witnesses,” honored the name “South Land of the Holy Spirit” given to Australia by its early Catholic settlers. The pope addressed more than 300,000 young adults gathered at Sydney’s racetrack on the role of the Holy Spirit in the formation of their consciences.

Addressing criticism of World Youth Days as nothing more than Catholic rock concerts, the pope spoke to his collaborators in the Roman Curia about the events.

“Joy simply reigned throughout those days,” he said. “The pope is not the star around which everything happens. The solemn liturgy is the center of everything at World Youth Day,” he said.

He plans to join with some 2 million young people at the next international World Youth Day in Madrid, Spain, in August 2011.

Yago de la Cierva, director of communications for World Youth Day in Madrid, estimates that 25 percent of young Spaniards practice their Catholic faith, 10 percent are anti-Catholic and the rest are somewhere in the middle.

“A vast majority of Spanish young people are indifferent to Christianity, either because they never received a Christian education, or their knowledge of Jesus is very superficial and what they have in their minds are a collection of cliches,” de la Cierva said.

“Having World Youth Day in Madrid is a precious present to the church in Spain because it will create opportunities for evangelization,” he said.

The pope encountered similar demographics in Australia and Germany, but that did not prevent his message from reaching his congregation and creating a response.

“Generation Benedict” is a network of young Catholics that was organized after the Cologne World Youth Day to promote the pope’s teachings. The group has 350 members in Germany according to its president, Nathanael Liminski, 24, of Wiesbaden. There are also chapters in Spain, Mexico, Austria, France and the United States.

The organization recently published a book called “Generation Benedict,” which takes up some of the key themes from the pope’s past talks to the young: prayer, vocations, dating, marriage, suffering, happiness and social justice.

“The fact that Pope Benedict is talking so much about truth and true love is most attractive to young people. He talks about the things young people long for,” Liminski said.

Christina Krotzer, a Michigan college student, was one of the young people who were at the New York gathering with the pope, but she received more than good marks for her singing. When the pope addressed the gathering about deciding their futures she was touched to her core.

“The Holy Father’s words hit me with a jolt, my heart stopped, and I heard nothing else but “open your heart to the call to follow the Lord in the religious life,” Krotzer said. Two years later, she said was about to enter a religious order.