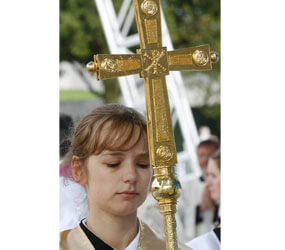 BIRMINGHAM, England –In the central liturgical moment of his four-day trip to Great Britain, Pope Benedict XVI beatified Cardinal John Henry Newman and said his vision of religion’s vital role in society should serve as a model today.

Celebrating Mass in Birmingham Sept. 19 for more than 50,000 people, the pope read aloud the decree proclaiming Cardinal Newman “blessed,” a major step on the way toward official recognition of sainthood.

A giant portrait of Blessed Newman hung behind the altar, and smaller likenesses were carried to the Mass by many of the faithful who filled Cofton Park in a suburb of the city.

Pope Benedict and the main concelebrants of the Mass processed to the altar while the choir and crowd sang “Praise to the Holiest in the Height,” a hymn with lyrics written by Cardinal Newman. The lyrics to the offertory song, “Firmly I Believe and Truly,” also were written by the cardinal.

Blessed Newman, a 19th-century theologian and a prolific writer on spiritual topics, left the Anglican Church and embraced Catholicism at the age of 44. The pope announced that his feast day would be Oct. 9, the day of his entry into the Catholic Church, but he did not mention his conversion or his relationship with the Anglicanism.

But welcoming Pope Benedict, Archbishop Bernard Longley of Birmingham offered a prayer of thanks for the Anglicans who nurtured Cardinal Newman’s faith and for Blessed Domenico Barberi, a Passionist priest who welcomed him into the Catholic Church in 1845.

In his homily, the pope drew a portrait of Blessed Newman as a man who had profound insight into the Christian call to holiness and the importance of prayer and whose eloquent prose was able to inspire many of his time and subsequent generations.

In particular, he said, Blessed Newman examined the relationship between faith and reason and “the vital place of revealed religion in civilized society” – themes which the German pope has hammered home during his visit to Great Britain.

He quoted the theologian’s appeal for a well-instructed laity and said it should serve as a goal for catechists today: “I want a laity not arrogant, not rash in speech, not disputatious, but men who know their religion, who enter into it, who know just where they stand, who know what they hold and what they do not, who know their creed so well that they can give an account of it.”

Beyond Blessed Newman’s intellectual legacy, the pope added, was his service to others as a priest – visiting the sick and poor, comforting the bereaved and caring for those in prison.

“No wonder that on his death so many thousand people lined the local streets as his body was taken to its place of burial not half a mile from here,” he said.

Deacon Jack Sullivan of Marshfield, Mass., whose healing from a crippling spinal condition in August 2001 was the miracle that allowed for Cardinal Newman’s beatification, read the Gospel at the Mass. Earlier in the liturgy, after the pope read the decree of beatification, Deacon Sullivan and his wife, Carol, carried a relic of Blessed Newman to Pope Benedict.

The pope began his homily by noting that the day marked the 70th anniversary of the Battle of Britain, a key chapter of British resistance to Nazi air attacks during World War II. He recalled that in late 1940 the nearby city of Coventry had suffered heavy bombing, with massive loss of life.

“For me as one who lived and suffered through the dark days of the Nazi regime in Germany, it is deeply moving to be here with you on this occasion and to recall how many of your fellow citizens sacrificed their lives, courageously resisting the forces of that evil ideology,” he said.

He said he joined in recalling the “shame and horror” of the death and destruction caused by the war and called for a commitment to work for peace and reconciliation wherever the threat of conflict looms.

Pilgrims were required to arrive at the Mass site hours before the pope, so they waited in a drizzle huddled in the dark with hands wrapped around steaming thermos cups of tea.

Katrina and Steve Herbert arrived from Aldershot shortly after 4 a.m. with their eight children, ages 13 years to 13 months.

“We have frozen. The kids have been pale green most of the day,” the mom said, but “it’s wonderful to be here. It’s an incredible day for our country and for Catholics.”

Ian Johnston, 50, who came to Birmingham with an Irish group from the Neocatechumenal Way, said, “It was wonderful to see the sun come out as soon as the pope arrived.”

After the Mass, Pope Benedict visited the Birmingham Oratory of St. Philip Neri, a religious community established by Cardinal Newman and the place he lived until his death in 1890. The pope visited the recently remodeled oratory chapel and the rooms of Cardinal Newman, which are now a museum.

Contributing to this story was Simon Caldwell in Birmingham.