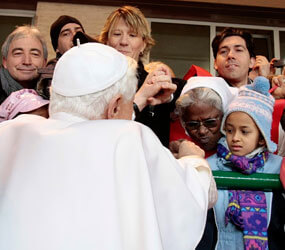 ROME – Pope Benedict XVI paid a visit to a church-run shelter for the homeless and said concrete acts of charity were essential expressions of the Christian faith.

“Know that the church loves you deeply and will not abandon you, because it recognizes in each of you the face of Christ,” the pope said at a Caritas hostel and medical center near Rome’s main train station Feb. 14.

The doctors, nurses and some 300 volunteers at the center applauded the German pontiff as he toured the complex during a 90-minute visit.

In a speech, the pope noted that the tough economic times had made church-run social services even more necessary. Over the last two years, the Caritas center has seen a 20 percent increase in the number of people seeking help.

The pope said the center was “a place where love is not only a word or a sentiment, but a concrete reality that allows the light of God to enter into the life of people and the civic community.”

He said the church’s actions in favor of the needy were a natural expression of faith in Christ, who identified in a particular way with the poor.

“In its service to people in difficulty, the church is motivated solely by the desire to express its faith in God who is the defender of the poor and who loves people for what they are, and not for what they possess or accomplish,” he said.

The pope cited his social encyclical of 2009, “Charity in Truth,” saying that charity was a necessary principle not only in personal relations but also in larger economic dealings. That is an urgently needed principle “in a world in which, instead, the logic of profit and the search for self-interest seems to prevail,” he said.

Before leaving the center, the pope accepted the gift of a restored crucifix from the town of Onna, which suffered severe damage in the 2009 earthquake in central Italy. The crucifix had belonged to the Church of St. Peter, which was destroyed in the quake.

Later in the day, speaking at his noon blessing at the Vatican, the pope said the Caritas shelter was an example of the beatitudes in action.

When Christ said, “Blessed are you who are poor, for the kingdom of God is yours,” he was speaking of divine justice that will come at the end of time, the pope said. But that justice can also be manifested in this world, he said.

“This is the task that the disciples of the Lord are called to carry out in today’s society,” he said. He expressed appreciation to the many people who donate their time and effort to social service centers around the world.

The pope, who dedicated his Lenten message this year to the theme of justice, encouraged people to read the message and meditate on it.

“The Gospel of Christ responds in a positive way to the human thirst for justice, but in an unexpected and surprising way. He does not propose a social or political revolution, but one of love, which he has already realized through his cross and resurrection,” he said.