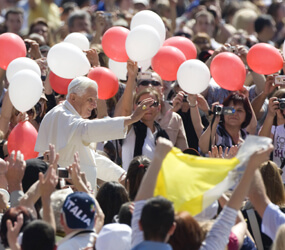 VATICAN CITY – Using the media present at his weekly general audience to address the people of Jordan, Israel and the Palestinian territories, Pope Benedict XVI said that he hoped to promote peace and unity during his eight-day visit to the region.

“I am eagerly looking forward to being with you and to sharing with you your aspirations and hopes as well as your pains and struggles,” the pope told the region’s people May 6, just two days before he was to begin his trip.

After his main audience talk about the teachings of St. John Damascene, Pope Benedict turned directly to the cameras to tell the people of the Holy Land that he would make his visit as a pilgrim of peace.

“My primary intention is to visit the places made holy by the life of Jesus and to pray at them for the gift of peace and unity for your families and all those for whom the Holy Land and the Middle East is home,” he said.

In addition to praying at Christian holy sites and meeting government officials, the pope said he also would have several meetings with representatives from “the Muslim and Jewish communities with whom great strides have been made in dialogue and cultural exchange.”

Interfaith gatherings are planned for both Amman, Jordan, and Jerusalem.

The pope is scheduled to make his second visit as pope to a mosque when he enters a new mosque in Amman. In Jerusalem, he will visit the Dome of the Rock, one of Islam’s holiest sites because it is believed to mark the spot from which Mohammed ascended to heaven temporarily.

In Jerusalem, Pope Benedict also will visit the Western Wall, which is sacred to Jews because it is what remains of the complex of the Second Temple, which was destroyed by the Romans in the year 70. Afterward, the pope will visit the headquarters of the Chief Rabbinate of Israel.

After the audience, the pope offered special greetings to the region’s Catholics and asked them “to join me in praying that the visit will bear much fruit for the spiritual and civic life of all who dwell in the Holy Land.”

“May we all praise God for his goodness,” the pope said. “May we all be people of hope. May we all be steadfast in our desire and efforts for peace.”

The text of the pope’s audience remarks in English is posted online at:
www.vatican.va/holy_father/benedict_xvi/audiences/2009/documents/hf_ben-xvi_aud_20090506_en.html.

The text of the pope’s audience remarks in Spanish is posted online at:
www.vatican.va/holy_father/benedict_xvi/audiences/2009/documents/hf_ben-xvi_aud_20090506_sp.html.