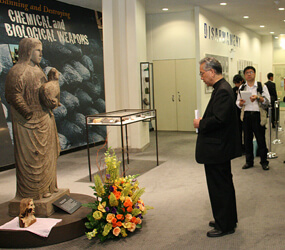 VATICAN CITY – Pope Benedict XVI asked world leaders to work calmly and seriously to control the spread of nuclear weapons “in the prospect of their complete elimination from the planet.”

At the end of his weekly general audience May 5, the pope made his appeal to participants at the U.N. Review Conference of Parties to the Treaty on the Non-Proliferation of Nuclear Weapons, being held in New York May 3-28.

Designed to promote nuclear disarmament, non-proliferation and an equitable development of peaceful nuclear energy, the treaty can succeed only if nations respect the commitments they made in signing it, the pope said.

“Peace, in fact, rests on trust and on respect for the obligations assumed and not only on a balance of forces,” he said.

“In that spirit, I encourage the initiatives aimed at progressive disarmament and the creation of zones free from nuclear arms in the prospect of their complete elimination from the planet,” the pope said.

In his main audience talk, Pope Benedict spoke about the ministry of priests as those called to promote holiness in their own lives and in the lives of the people they meet.

Through the ordained priesthood, Christ gave the church the gift of ministers, “who despite human poverty, participate in his own priesthood,” the pope said.

“Every priest knows that he is an necessary instrument of the saving action of Christ, but always an instrument. That awareness must make him humble and generous in administering the sacraments,” he said.

Pope Benedict told the estimated 15,000 people gathered in St. Peter’s Square for the audience that in recognizing it is Christ who acts in the sacraments and aware that all human beings are fallible, the church teaches that the validity of the sacraments does not depend on the holiness of the priest celebrating them.

“But that does not remove the necessary – or rather indispensable – requirement of striving for moral perfection, which must reign in every authentically priestly heart,” the pope said.

He asked priests to frequent the sacrament of confession in order to experience reconciliation with God and to spend more time in the confessional so their faithful “can find mercy, council and support, feel loved and understood by God and experience the comfort of God’s mercy.”

Greeting pilgrims from Sweden, where a Congress on the Family was scheduled for late May, the pope said marriage was “an instrument of salvation, not only for married people but for the whole of society.”

“Those of us fortunate to be born into a stable family discover the first and most fundamental school for virtuous living and the qualities of good citizenship,” said the pope.

“Human beings, made in the image and likeness of God, are made for love – indeed at the core of our being, we long to love and be loved in return,” he said.

Only God’s love can fully satisfy the human desire for love, he said, but through the love of a husband and wife, the love of parents for children and the love of siblings for each other, “we are offered a foretaste of the boundless love that awaits us in the life to come.”

The text of the pope’s audience remarks in English will be posted online at: www.vatican.va/holy_father/benedict_xvi/audiences/2010/documents/hf_ben-xvi_aud_20100505_en.html.

The text of the pope’s audience remarks in Spanish will be posted online at: www.vatican.va/holy_father/benedict_xvi/audiences/2010/documents/hf_ben-xvi_aud_20100505_sp.html.