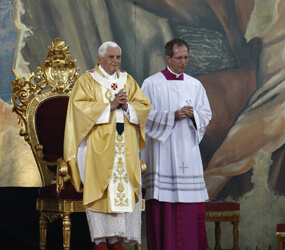 JERUSALEM – Standing below the Mount of Olives, where Jesus wept for Jerusalem, and in the shadow of the walls of the city where he rose from the dead, Pope Benedict XVI urged the region’s Christians to stay in the Holy Land and work for harmony among its people.

Those who love Jerusalem want to see the city “as a prophecy and promise of that universal reconciliation and peace which God desires for the whole human family,” the pope said May 12 during an outdoor Mass in the Josafat Valley.

The valley runs just below the basilica of the Garden of Gethsemane between the walls of the Old City and the Mount of Olives.

“Sadly, beneath the walls of this same city, we are also led to consider how far our world is from the complete fulfillment” of the prophecy of Jerusalem as a city of peace, Pope Benedict said in his homily.

“In this holy city where life conquered death, where the Spirit was poured out as the first fruits of the new creation, hope continues to battle despair, frustration and cynicism, while the peace which is God’s gift and call continues to be threatened by selfishness, conflict, division and the burden of past wrongs,” the pope said.

He asked the city’s Christians to hang on to the hope that comes from Jesus’ resurrection and to demonstrate that hope to others by “bearing witness to the power of forgiveness and showing forth the church’s deepest nature as the sign and sacrament of a humanity reconciled, renewed and made one in Christ.”

Israeli police said about 5,000 people attended the Mass; many arrived hours early to get through security and get a good seat. They used umbrellas to shade themselves from the harsh spring sun and brought folding chairs and picnic lunches. A group of Mexican pilgrims shared tacos with those seated nearby.

Giovanni Anbar, a Palestinian Catholic who lives just a five-minute walk from the Mass site, arrived with his 3-year-old daughter, Christine.

“We are here to tell him there are still Palestinian Christians in Jerusalem,” Anbar said. “A lot of people in the world think Jerusalem has only Muslims and Jews.”

He said the pope had a difficult mission in visiting the region’s Catholics because “when you visit the Holy Land, it is a place of conflict and you cannot separate religion from politics.”

Welcoming the pope to the site, Latin Patriarch Fouad Twal of Jerusalem told him that the Palestinians dream of a “free and independent” state of their own while the people of Israel dream of living in peace and security.

He said the Catholic community is shrinking, mainly because of emigration due to the “unjust occupation” of Palestinian land by Israel and “all its humiliation.”

In his homily, Pope Benedict described the emigration of Christians as a “tragic reality” that is a worry to everyone who loves Jerusalem because it marks a “cultural and spiritual impoverishment” of the city.

He said he knows the Catholics of the Holy Land have endured difficulties, frustrations, pain and suffering because of the conflicts that have afflicted the region, and he said he came to demonstrate that the universal church has not forgotten those who are the direct descendents of Jesus’ disciples.

If Jerusalem is to live up to its divine vocation, he said, it must be a place that teaches “respect for others, dialogue and mutual understanding; a place where prejudice, ignorance and the fear which fuels them are overcome by honesty, integrity and the pursuit of peace.”

“There should be no place within these walls for narrowness, discrimination, violence and injustice,” Pope Benedict said.

Those who profess a belief in God, the creator of all, “must be the first to promote this culture of reconciliation and peace, however painstakingly slow the process may be and however burdensome the weight of past memories,” he said.

Manar Abu Said, 17, a student at the Catholic-run Terra Santa School in Jerusalem, said, “It is important for the youth to be here because we are part of the church.” On a more personal level, she also said she would be praying during the Mass for good grades on her upcoming final exams.

Nyok Thowat, 30, was part of a large group of Catholic refugees from Sudan attending the Mass.

“I wish the pope to pray for the peace of southern Sudan, for peace for Jerusalem, for peace for the whole world. If there was no war, nobody would have to move to a foreign country,” he said.