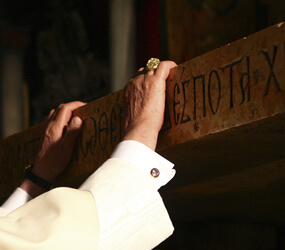 JERUSALEM – Standing before Christ’s empty tomb, Pope Benedict XVI urged Christians in the Holy Land to bury their differences so they could preach hope and peace with one voice.

“The church in the Holy Land, which has so often experienced the dark mystery of Golgotha, must never cease to be an intrepid herald of the luminous message of hope which this empty tomb proclaims,” the pope said May 15.

The pope reached the Church of the Holy Sepulcher on the last day of his eight-day pilgrimage to the Holy Land.

Entering the church with a crush of security officers, clergy and photographers, Pope Benedict knelt down and kissed the Stone of Unction, where tradition holds that Jesus’ body was prepared for burial.

With a choir chanting in the background, the pope walked to the tiny chapel believed to be the site of the tomb. He stooped down to enter the chamber alone and remained there in prayer for several minutes.

The papal visit to the church, which is built over the sites where Christians believe Jesus was crucified and was buried, came between ecumenical meetings hosted by the Greek Orthodox and Armenian Orthodox patriarchs of Jerusalem.

The two churches share oversight of the Church of the Holy Sepulcher with the Catholic Church, and competing claims to control various chapels and times for prayer have led to tensions and even fisticuffs in the past.

Referring to the church by its Orthodox title – the “memorial of the ‘Anastasis’“ or Resurrection – Pope Benedict said it “bears mute witness both to the burden of our past, with its failings, misunderstandings and conflicts, and to the glorious promise which continues to radiate from Christ’s empty tomb.”

The tomb, he said, is the place “where God’s power was revealed in weakness” and where “human sufferings were transfigured by divine glory.”

“May hope rise up ever anew, by God’s grace, in the hearts of all the people dwelling in this land,” the pope said in the presence of benefactors from the Equestrian Order of the Holy Sepulcher of Jerusalem, friars from the Franciscan Custody of the Holy Land, priests and seminarians from the Latin Patriarchate of Jerusalem and representatives of the Orthodox churches.

Most of the guests arrived at the church more than two hours before the pope for rigorous Israeli security checks, which caused some annoyance.

Father Humam Khzouz, chancellor of the Latin patriarchate, told Catholic News Service, “It was a disrespectful way to treat church officials. … It was humiliating since we are coming to our own church.”

Patrick Powers, head of the Western lieutenancy of the Equestrian Order of the Holy Sepulcher of Jerusalem, said he thought the entire papal trip would bring attention to the difficult life of Christians in the Holy Land.

For the members of the equestrian order, which provides spiritual and significant financial support to the Catholic communities in the Holy Land, Powers said the papal visit was “very holy and very humbling.”

Welcoming the pope to the church, Latin Patriarch Fouad Twal of Jerusalem told him, “Reassured by the Lord’s promise to be with us to the end of time, I dare to affirm that neither the conflict nor the occupation, nor the walls of separation, nor the culture of death nor the emigration of Christians will succeed in bringing down our morale and extinguishing our hope or in smothering our joy.”

Pope Benedict told those gathered inside the church, “The Gospel reassures us that God can make all things new, that history need not be repeated, that memories can be healed, that the bitter fruits of recrimination and hostility can be overcome.”

The Gospel, he said, promises that “a future of justice, peace, prosperity and cooperation can arise for every man and woman, for the whole human family, and in a special way for the people who dwell in this land so dear to the heart of the Savior.”

The Church of the Holy Sepulcher is the place where Jesus showed the world that “evil never has the last word, that love is stronger than death, that our future and the future of all humanity lies in the hands of a faithful and provident God,” Pope Benedict said.

Monsignor Hans Brouwers, vice chancellor of the Equestrian Order of the Holy Sepulcher of Jerusalem, said the entire situation of the Holy Land is “a battle between good and evil.”

He praised the dedicated men and women working in the churches and working for peace, “truly ministering as Jesus wanted,” but said that wherever people are doing good “you also have the devil. The devil doesn’t want it to work.”

The empty tomb, however, gives Christians the strength to go on because it proclaims that “good will prevail and it is eternal,” Monsignor Brouwers said.

Before going to the Church of the Holy Sepulcher, Pope Benedict met with a variety of Christian leaders in the headquarters of the Greek Orthodox Patriarchate of Jerusalem.

Pope Benedict told Patriarch Theophilos III and the other leaders, “It is precisely in our burning desire to bring Christ to others, to make known his message of reconciliation, that we experience the shame of our division.”

The pope expressed his hope that ecumenical dialogue would continue and that Christians would learn to cooperate in preaching the Gospel and serving all men and women.

Praying for peace and harmony among Christians, he also prayed that everyone would understand that Christians in the Holy Land want what the other inhabitants of the region want: “a life of religious freedom and peaceful coexistence” and equal access to education, employment and housing.