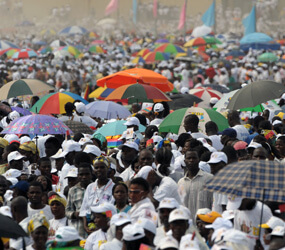 LUANDA, Angola – At a Mass for hundreds of thousands of Angolans, Pope Benedict XVI called on Africa to embrace the Gospel and disperse the “clouds of evil” that have brought war, ethnic rivalry, tribalism and greed to the continent.

In a country devastated by 27 years of civil war, the pope quoted the biblical admonition that war can “destroy everything of value,” including families, communities and works of labor.

“This experience is all too familiar to Africa as a whole: the destructive power of civil strife, the descent into a maelstrom of hatred and revenge, the squandering of the efforts of generations of good people,” the pope said.

The Mass, celebrated March 22 on a vast esplanade in an industrial suburb of Luanda, was the liturgical highlight of his stay in Angola, and drew the biggest crowd of his weeklong visit to Africa. Some had spent the night at the site to guarantee a good seat.

The pope sat beneath a curved corrugated roof that protected him from the hot sun, frequently wiping perspiration from his face with a handkerchief. Many worshippers shielded themselves with umbrellas.

The Mass included prayers in six native languages of Angola, a former Portuguese colony evangelized more than 500 years ago. Unlike an open-air liturgy he celebrated in Cameroon earlier in the week, which featured rousing African song and dance, this one had a quieter tone.

The offertory was the most typically “African moment,” as men and women carried fruits, vegetables, bread and a live goat to the foot of the altar and swayed to a lilting tune picked out on an electric guitar.

Nearing the end of his weeklong African journey, the pope looked and sounded good as he read his homily in Portuguese and English.

He said he had come to Africa to preach a message of forgiveness, hope and new life in Christ. He praised Angola for embarking on the path of national reconciliation, but said true reconciliation “can only be the fruit of conversion, a change of heart, a new way of thinking.”

The task facing the church in Angola, he said, is to become itself a place of unity and communion in order to bring to others “the healing touch of God’s merciful love.”

“How much darkness there is in so many parts of our world! Tragically, the clouds of evil have also overshadowed Africa, including this beloved nation of Angola,” he said.

“We think of the evil of war, the murderous fruits of tribalism and ethnic rivalry, the greed which corrupts men’s hearts, enslaves the poor, and robs future generations of the resources they need to create a more equitable and just society – a society truly and authentically African in its genius and values,” he said.

He warned of an “insidious spirit of selfishness” that leads to hedonism, drug use, sexual irresponsibility, the weakening of marriage and “the pressure to destroy innocent human life through abortion.”

Against these dangers, the church preaches a message of “unbounded hope,” knowing that reconciliation begins in the human heart and with small acts of kindness, he said. It means the church will have to be a “sign of contradiction in the face of hardened attitudes and a mentality that sees others as a means to be used,” he said.

The pope said Angolans know from bitter experience that the work of rebuilding society is slow and arduous, compared with “the sudden, destructive fury of evil.” But they should not become discouraged, he said, because “God does not give up on us.”

The liturgy included a moment of prayer for two young women trampled to death the day before at a Luanda stadium where the pope later presided over a youth rally. Eighty-nine others were injured in the stampede, which occurred when gates to the stadium were opened several hours before the pope’s arrival.

The pope led a special prayer for the victims.

“We entrust them to Jesus, so he may welcome them in his kingdom. To their families and friends I express my solidarity and my deep condolences because they were coming to see me,” the pope said.

After the Mass, the pope recited the Angelus and prayed for the end of hostilities in the Great Lakes region in southeastern Africa.