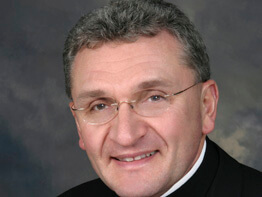 WASHINGTON – Pope Benedict XVI has named Bishop David A. Zubik of Green Bay, Wis., to head the Diocese of Pittsburgh, where he once was an auxiliary bishop.
The appointment was announced in Washington July 18 by Monsignor Martin Krebs, charge d’affaires of the Vatican nunciature.
Auxiliary Bishop Paul J. Bradley has been administrator of the Pittsburgh Diocese since June 2006. He was elected to the post after then-Bishop Donald W. Wuerl was installed to head the Washington Archdiocese.
“I was truly honored to serve the wonderful people of Green Bay,” Bishop Zubik said in a statement.
“Green Bay became my new home. Now Pittsburgh is my home again,” he said. “I love the church of Pittsburgh. I love being a part of the presbyterate of Pittsburgh once again. I love the people of Pittsburgh. It is a wonderful church – very much alive in Christ.”
Bishop Zubik, born Sept. 4, 1949, in Sewickley, Pa., received an undergraduate degree at Duquesne University in 1971 and continued his studies at St. Mary Seminary and University in Baltimore, where he earned a degree in theology.
After his ordination to the priesthood in 1975, he served as a parochial vicar, vice principal of a Catholic high school and student chaplain. He also was chaplain at the Sisters of St. Joseph motherhouse. In 1982, he earned a master’s degree in education administration.
In 1987 he was appointed administrative secretary to then-Bishop Anthony J. Bevilacqua of Pittsburgh. A year later he was named administrative secretary to Bishop Wuerl, appointed to head the Pittsburgh Diocese in 1988, after Bishop Bevilacqua was named Philadelphia archbishop.
At the diocesan level then-Monsignor Zubik also was director of clergy personnel, associate general secretary, chancellor, vicar general and general secretary before being named an auxiliary bishop of the diocese in 1997.
In his six years as an auxiliary bishop in Pittsburgh, Bishop Zubik served on many boards and committees at the diocesan, local and national levels, including the St. Paul and St. Vincent seminaries and the Pennsylvania Catholic Conference. He has been a member of the Duquesne University board of directors, the U.S. Conference of Catholic Bishops’ Committee on Priestly Life and Ministry and Committee on Priestly Formation.
Bishop Zubik was appointed bishop of Green Bay in late 2003, and was installed that December.
Within a month of his installation he urged Catholic legislators “to broaden their understanding of the rationale that respects human life so that this perspective can be reflected in their leadership decisions,” noting that “the teaching of the Catholic Church on the issue of life is crystal clear, especially our belief that life is sacred from the first moment of conception to the moment of natural death.”
The question of how he could encourage and enlist legislators – especially Catholics – to reflect a commitment to pro-life issues “is one that demands first a pastoral outreach on my part and a willingness to receive my concerns on the part of legislators,” Bishop Zubik said.
He is chairman of the USCCB Committee on the Laity, and is a member of the bishops’ Administrative Committee and the audit subcommittee of the Committee on Budget and Finance, in addition to his work on the bishops’ National Advisory Council.
In March 2003, he baptized a set of Pittsburgh sextuplets the day they were born, using an eyedropper to hold the baptismal water. This summer, he ordained identical twins to the priesthood for the Green Bay Diocese.
Archbishop Wuerl said in a July 18 statement: “Bishop Zubik knows, loves and has served the church of Pittsburgh, and has walked with it through all of its many moments of challenge and development for the past 20 years. My prayer is that God will bless him and his ministry and of course the church of Pittsburgh.”
“I am sure the people of Pittsburgh will welcome him back with affection and pride,” said a July 18 statement from Cardinal Justin Rigali of Philadelphia. “Bishop Zubik has shown himself to be a dedicated and loyal servant of Jesus Christ and the people of God in Green Bay and I am certain that he will be a compassionate and wise shepherd to the Catholic faithful in Pittsburgh.”
Bishop Zubik is the fifth diocesan native to serve as Pittsburgh’s bishop.