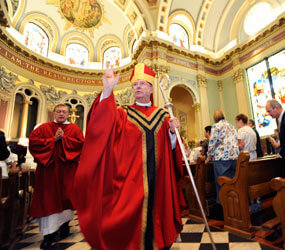 The pope also named Monsignor Michael J. Fitzgerald, 62, judicial vicar of the metropolitan tribunal of the Philadelphia Archdiocese, as an auxiliary bishop of the archdiocese.

The appointments were announced in Washington June 22 by Archbishop Pietro Sambi, apostolic nuncio to the United States.

In introductory remarks June 22 in Harrisburg, Bishop McFadden said: “I come with only one agenda and that is to share with you my faith in Jesus Christ. I will encourage you to embrace Jesus and to open your hearts to the God who loves us so much that he sent his only son, Jesus, to die for us so that we might have life and have it to the full.”

Bishop McFadden’s installation Mass has been scheduled for Aug. 18.

Joseph P. McFadden was born in Philadelphia, May 22, 1947. He’s a graduate of St. Joseph’s University in Philadelphia and studied for the priesthood at St. Charles Borromeo Seminary in Wynnewood, Pa., where he earned a master’s degree in divinity.

He was ordained a priest for the Philadelphia Archdiocese in 1981, and an auxiliary bishop of Philadelphia in 2004. He served in parishes in the archdiocese and as spiritual director at St. Charles Borromeo Seminary and was a member of the Archdiocesan Committee for the Ongoing Formation of the Clergy.

Bishop McFadden has served on the U.S. bishops’ Committee on Catholic Education and their Task Force on Faith Formation and Sacramental Practice.

Cardinal Justin Rigali of Philadelphia called Bishop McFadden “a skillful leader with vision and a faith-filled priest who serves joyfully in Jesus’ name,” and said he will be “a compassionate and wise shepherd for the people of Harrisburg.”

Bishop-designate Fitzgerald was born May 23, 1948, in Montclair, N.J. He attended Bishop Kenrick High School in the Philadelphia Archdiocese. He earned a bachelor’s degree from Temple University in 1970, a law degree from Villanova University in 1973, and a master’s degree in divinity from St. Charles Borromeo Seminary in 1976.

Bishop-designate Fitzgerald served two years as assistant pastor in archdiocesan parishes and later worked in the archdiocesan tribunal. He was director of the archdiocesan Office for Legal Services, 1991-2004, vice rector of St. Charles Borromeo Seminary, 2004-2007, and in 2007 was named judicial vicar for the archdiocese.

Introduced June 22 as the next auxiliary bishop for the archdiocese, Bishop-designate Fitzgerald thanked his parents for teaching him the way of faith, “not only by what they say, but by what they do.”

“I am blessed to say that my own parents, Dot and Ed Fitzgerald, did this quietly, unselfishly and with great love over the years for my eight brothers and sisters and me,” he said. “How grateful I am and will always be for the example of faith, love and family life that they have given to us.”

Bishop-designate Fitzgerald will be ordained to the episcopate Aug. 6, along with Bishop-designate John J. McIntyre, who had been appointed an auxiliary bishop two weeks before.