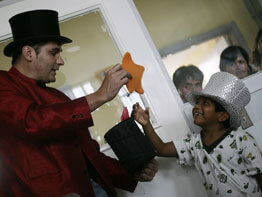 In his message for the Feb. 11 celebration of World Day of the Sick, the pope urged Catholics to not be indifferent to the suffering of these “weakest and most defenseless creatures” and to recognize a “pressing duty to intervene.”

World Day of the Sick is marked each year on the feast of Our Lady of Lourdes. The Vatican released the pope’s message Feb. 7.

The pope dedicated this year’s message to children.

He called attention to those who are struck by crippling diseases or are battling illnesses that are still incurable despite great medical advancements.

He underlined the plight of children “wounded in body and soul as a consequence of conflict and war and other innocent victims of the senseless hatred of adults.”

He noted the difficulties children living on the street face because they are deprived of “the warmth of a family” and are left to fend for themselves.

The pope also spoke of the psychological scars children live with the rest of their lives when their innocence has been violated “by despicable people.”

“We cannot forget the countless numbers of young people who die because of thirst, hunger, and lack of medical care,” he said, adding that children of refugees and others whose families are on the move searching for a better way of life are especially vulnerable.

“A silent cry of pain emerges from all these children that calls out to the conscience of men and women and people of faith,” he said.

“The Christian community, which cannot remain indifferent before such dramatic situations, recognizes the pressing duty to intervene,” the pope said.

And, he said, “given the changed situation of health care today, closer collaboration is needed between health care professionals working in different health care institutions and the ecclesial community present on the ground.”

Yet, he made a “heartfelt appeal” to world leaders to do more and to strengthen laws and programs that support sick children and their families.

The family of a sick child often experiences serious difficulties and challenges and the Catholic community must do all it can to come to their aid with concrete help, said the pope.

By welcoming these families and sharing in their suffering, people can help them create “an atmosphere of serenity and hope and make them feel part of a larger family of brothers and sisters in Christ,” he said.

People’s selfless and generous love toward these families in need is “a reflection and sign of the merciful love of God who never abandons his children during times of trial, but always replenishes them with wonderful resources” so they can better face life’s difficulties, he said.

Those who dedicate their lives to helping sick children “give eloquent witness to the love for human life, particularly for the life of someone who is weak and utterly dependant on others,” he said.

“In fact, it is necessary to rigorously affirm the absolute and supreme dignity of every human life,” he said. The church teaches that human life “is beautiful and should be lived in full even when it is weak and wrapped in the mystery of suffering,” he added.

Before praying the Angelus with pilgrims gathered in St. Peter’s Square Feb. 8, Pope Benedict recalled how Jesus was a “true doctor of bodies and souls” as he coupled his teaching with the healing of those who were sick and suffering.

Even though illness is part of the human experience, it is still very difficult to “get used to it,” especially when one is dealing with a truly serious and debilitating disease, he said.

That is because “we are made for life” and our instinct is to live, he said.

Jesus is the God of life and frees us from all that is bad, he said.

The sign of Christ’s power of love is in his healings, he said. His healings and teachings make up a single, unified message of hope and salvation, said the pope.