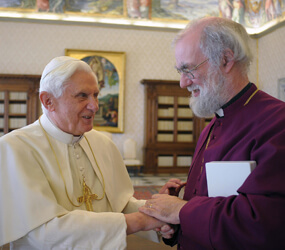 VATICAN CITY – While some pundits have sounded the death knell for ecumenical relations between the Roman Catholic Church and the Anglican Communion, Pope Benedict XVI and Archbishop Rowan Williams of Canterbury, the Anglican spiritual leader, pledged to move forward.

The pope and archbishop met privately at the Vatican for about 20 minutes Nov. 21.

A Vatican statement said the two leaders reiterated “the shared will to continue and to consolidate the ecumenical relationship between Catholics and Anglicans.”

And, it said, they discussed the work their representatives were to begin Nov. 23 preparing for a third round of study by the Anglican-Roman Catholic International Commission, the body for official theological dialogue.

The statement said the two leaders discussed “recent events affecting relations between the Catholic Church and Anglican Communion,” a reference to Pope Benedict’s apostolic constitution establishing “personal ordinariates” – structures similar to dioceses – for Anglicans who want to enter full communion with the Roman Catholic Church while maintaining some of their Anglican heritage.

The announcement appeared to cause some tension, mainly because Archbishop Williams was not informed about the papal provision until shortly before it was announced publicly in late October.

Despite the Vatican’s clear statements that the move was a pastoral response to people who contacted the Vatican seeking to become Catholic, many headlines treated it as the Vatican taking unfair advantage of tensions within the Anglican Communion over the ordination of women as priests and bishops.

In an interview Nov. 21 with Vatican Radio, Archbishop Williams said he told the pope that the way the announcement was handled “put us in an awkward position,” but he also said media presentations of the announcement as a “dawn raid on the Anglican Communion” were simply wrong.

“But I don’t think it’s a question of the Roman Catholic Church as it were trying to attract by advertising or by special offers,” he said, adding that for that reason “I don’t particularly worry about it.”

Asked for the pope’s reaction, the archbishop said, “the main message was that the constitution did not represent any change in the Vatican’s attitude toward the Anglican Communion as such.”

As for the issue of ordaining openly gay men and blessing gay marriages, which a few Anglican provinces have done, Archbishop Williams told Vatican Radio the official policy of the Anglican Communion remains opposed to such practices.

“We have to keep considering this, praying about it (and) reflecting without creating too many facts on the ground that pretend the debate is settled,” he told the radio. At the same time, he said, it must be done in a way that shows how much “we value and appreciate the contribution made already by many faithful gay and lesbian people who serve as clergy and laity in the church.”

Cardinal Walter Kasper, president of the Pontifical Council for Promoting Christian Unity, and Archbishop Williams both said they thought the next topic to be treated by ARCIC would be the relationship between the local and universal church.

Archbishop Williams told Vatican Radio that if ARCIC studied the topic, the question of the ordination of women probably would come up, at least in the context of the decision-making authority of local dioceses or provinces.

In a speech Nov. 19 at Rome’s Pontifical Gregorian University, the archbishop said 40 years of ecumenical dialogue involving Catholics, Orthodox and Anglicans have challenged a “simplistic opposition” between the local and universal church “as if the choice were between a conglomerate of local and almost randomly diverse communities vaguely federated together and a monolithic global corporation.”

But, he said, ecumenically there still is a question regarding whether “there is a mechanism in the church that has the clear right to determine for all where the limits of Christian identity might be found,” and whether “the integrity of the church (is) ultimately dependent on a single identifiable ministry of unity (the papacy) to which all local ministries are accountable.”

In the end, the archbishop said in his speech, the question can be formed as: Is the universal church “an entity from which local churches derive their life, or is it the perfect mutuality of relationship between local churches?”

Theological debates over the relationship between the universal church and the local church are not new. In fact, for several years beginning in the late 1990s, Cardinal Kasper and the then-Cardinal Joseph Ratzinger, now Pope Benedict, conducted a vigorous debate on the theme in public speeches and in theological journals and magazines, including the Jesuit-run America magazine.

Cardinal Kasper opposed what he called a “one-sided emphasis” on the universal church and a corresponding decline in the authority of local bishops around the world.

Cardinal Ratzinger argued that one could not deny the primacy of the universal church over the local church, especially because the church is a reality that transcends geographical limits.

In the end, the future pope said that if the argument is understood properly, differences “can and perhaps should coexist peacefully.”