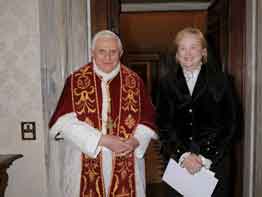 “The American people’s historic appreciation of the role of religion” in making policy decisions that take ethical and moral values into account, the pope said, “is reflected in the efforts of so many of your fellow citizens and government leaders to ensure legal protection for God’s gift of life, from conception to natural death.”

The pope said the same commitment to moral values is seen in efforts to safeguard “the institution of marriage, acknowledged as a stable union between a man and a woman, and that of the family.”

With members of her family looking on Feb. 29, Glendon and the pope exchanged speeches focused on protecting human dignity, eliminating poverty and promoting peace.

And both of them mentioned Pope Benedict’s planned April 15-20 trip to Washington and New York.

“I look forward to my pastoral visit to the United States in April,” the pope told Glendon.

“On your first visit to the U.S. as pontiff, you will find a warm welcome from a nation that understands the important contribution offered by people of faith in our society,” the ambassador assured him.

“You will be among friends,” she said.

Glendon, 69, is no stranger to the Vatican. The Harvard law professor has been a member of the Pontifical Academy of Social Sciences since 1994 and served as president of the body for almost four years before being sworn in as U.S. ambassador to the Vatican.

Welcoming Glendon in her new role, Pope Benedict said, “I am confident that the knowledge and experience born of your distinguished association with the work of the Holy See will prove beneficial in the fulfillment of your duties.”

Pope Benedict’s concerns about certain trends in U.S. society and certain policies of the U.S. government were framed as expressions of praise for those working to protect human life and the traditional family and statements of hope for peace.

Looking at global issues, the pope said, “the plague of international terrorism” is not the only threat facing the human family.

“The quickening pace of the arms race and the continuance of tensions in the Middle East” also threaten the future, he said.

The pope repeated his call for “patient and transparent negotiations” to reduce and eliminate nuclear weapons, and he expressed his hope that the November Middle East peace conference hosted by the United States in Annapolis, Md., was “the first of a series of steps toward lasting peace in the region.”

Pope Benedict also repeated his conviction that nations, including the United States, must not act unilaterally in the face of problems that threaten peace and stability around the world.

Peace in the Middle East, concern over new nations developing nuclear weapons and other problems, he said, call for “trust in, and commitment to, the work of international bodies such as the United Nations.”

The international organizations “by their nature are capable of fostering genuine dialogue and understanding, reconciling divergent views, and developing multilateral policies and strategies capable of meeting the manifold challenges of our complex and rapidly changing world.”

Glendon and the pope also noted that 2008 marks the 60th anniversary of the Universal Declaration of Human Rights, an anniversary Glendon said she hoped the United States and Vatican could celebrate with a joint commemoration.

Pope Benedict said the declaration “was the product of a worldwide recognition that a just global order can only be based on the acknowledgment and defense of the inviolable dignity and rights of every man and woman.”

The massacres and wars of the 20th century, “culminating in the planned extermination of whole peoples,” particularly the Jews during World War II, demonstrate that political bargaining alone cannot ensure the future of humanity and the protection of individuals, the pope said.

“It must be the fruit of a deeper consensus based on the acknowledgment of universal truths,” he said.

Pope Benedict praised the people of the United States for the way they have worked together to unite “people of good will, regardless of race, nationality or creed.”

“Today this task of reconciling unity and diversity, of forging a common vision and summoning the moral energy to accomplish it, has become an urgent priority for the whole human family,” he said.

The pope also praised the United States for its generosity in foreign aid.

“The building of a more secure future for the human family means first and foremost working for the integral development of peoples, especially through the provision of adequate health care, the elimination of pandemics like AIDS, broader educational opportunities to young people, the promotion of women and the curbing of the corruption and militarization which divert precious resources from many of our brothers and sisters in the poorer countries,” he said.

Glendon told the pope, “Your Holiness, the United States is an instrument of hope in the world because its people are compassionate and generous.”