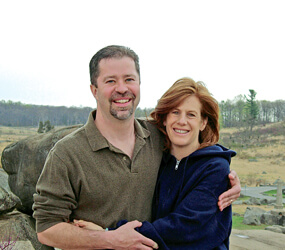 Pope Benedict XVI has named two parishioners of St. Ignatius in Ijamsville to serve on the Pontifical Council for the Family.

John and Claire Grabowski were one of 10 couples from different countries named to the council. Cardinal Sean P. O’Malley of Boston was one of four cardinals and three bishops named to the presiding committee of the council, which is headed by Italian Cardinal Ennio Antonelli.

The Grabowskis, who have been active in marriage preparation ministry for many years, did not realize they were under consideration for the appointment.

John Grabowski is a professor of moral theology at The Catholic University of America in Washington. He has been published widely in the areas of moral theology, marriage, sexuality and bioethics. The professor has been a theological adviser to the U.S. Conference of Catholic Bishops Subcommittee on Marriage and Family for four years.

“One of the things we find most rewarding in our life as a couple is to serve the church as a couple,” John Grabowski said. “This seems like an opportunity to do that on a different level.”

The Grabowskis, parents of five, said marriage is under attack. While they do not yet know what their responsibilities on the council will be, they hope to contribute to promoting marriage and family life.

“To live as a Christian family means to swim against the tide and be countercultural,” John Grabowski said.

Claire Grabowski said she is eager to see the church do more to help parishes work with families in understanding Pope John Paul II’s “Theology of the Body,” a comprehensive teaching on human sexuality.

The council is responsible for the promotion of the pastoral ministry and apostolate to the family. It coordinates efforts related to the promotion of responsible procreation and initiatives in defense of human life at all stages. The Grabowskis will be one of 19 married couples on the council.