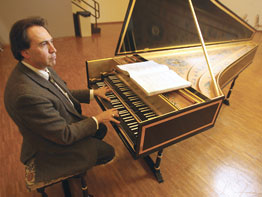 Edward Polochick has been conducting Handel’s “Messiah” in Baltimore since 1982, but he never grows tired of it.

“(The Messiah) is one of the greatest masterpieces ever written,” said Mr. Polochick, who will lead the Baltimore Symphony Orchestra and the Concert Artists of Baltimore Symphonic Chorale in performing the timeless oratorio once again at the Joseph Meyerhoff Symphony Hall Dec. 5.

Since he began the concert 26 years ago, Mr. Polochick has been passionate about making the “Messiah” true to the Baroque era – from the way he conducts it down to the use of trills and arpeggios.

The Scranton, Pa., area native, who grew up in Sacred Heart of Jesus in Peckville, Pa., conducts the piece from a harpsichord.

Demonstrating in the practice room in the lower level of the symphony hall just a few days before the performance, Mr. Polochick nimbly glided his fingers across the black and white keys. The instrument, black with gold trim and flowers delicately painted on the panel beneath the strings, was reminiscent of another time.

During the “Messiah” concert, he alternately sits and stands in order to lead the instrumentalists and singers, some of whom have been performing “Messiah” in Baltimore since the annual concert began in the 1980s.

Although Mr. Polochick has conducted “Messiah” in other cities, he said it’s never quite the same.

“I think that our ‘Messiah’ is one of the most finely honed performances,” he said. “It is about as close to perfection as you can get.”

The performance becomes electrified, explained Mr. Polochick, his face animated with enthusiasm. “You’d have to see this live to understand.”

Audience members often cry and cheer at the end of the performance.

“The beauty of (music) is it crosses all boundaries,” said Mr. Polochick, who has appeared with symphonies across the country and in Russia, Korea and Mexico. “It’s one of the most communicative of all the arts.”

It doesn’t take prior knowledge to relate to music, he explained, adding that it speaks to the emotions as well as the intellect.

With humility, Mr. Polochick said, “I’m one of the luckiest people I know because I get to do what I love and make a living.”