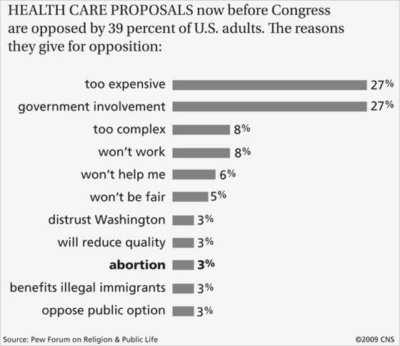 WASHINGTON – As the Senate prepared to begin discussing its version of health reform legislation, two national polls were assessing the impact of abortion on the debate.

A CNN/Opinion Research Corp. survey released Nov. 18 found that 61 percent of Americans oppose “using public funds for abortion when the woman cannot afford it,” while only 37 percent support it.

In response to another question, 51 percent said “women covered by private health insurance plans that are paid for by private individuals or employers” with no federal funds involved should “pay the complete costs of that abortion out of their own pockets,” while 45 percent said the private health insurance plan “should cover some or all of the costs of an abortion.”

A separate survey released Nov. 19 by the Pew Research Center for the People & the Press and the Pew Forum on Religion & Public Life found that few of those surveyed cited abortion as a reason for their opposition to health reform proposals currently before Congress.

Stella Reese, a lay leader from St. Peter Claver Catholic Church in New Orleans, said she and the others brought “the prayers of the thousands of families in our communities here with us today.”

Reese also is a member of the Micah Project, which helped bring together 700 people for a June town hall meeting on health care with Rep. Ahn “Joseph” Cao, the only Republican who voted for the House health reform legislation.

“We pray that the Senate will act with the courage and wisdom to know that stopping now is not an option for families suffering from the rising cost of health care,” she added.

The Senate scheduled a vote for Nov. 21 on whether to begin debate on the health reform bill presented by Majority Leader Harry Reid of Nevada. At least 60 votes were needed to assure that there is not a filibuster against the legislation, which is estimated to cost $848 billion over 10 years.

The CNN/Opinion Research Corp. survey asked 1,014 adult Americans what they thought about a variety of provisions in the House health reform legislation.

The Pew survey of 1,003 adult Americans found that 55 percent said they thought abortion should not be a guaranteed medical benefit in health reform, while 28 percent said it should and 17 percent said it depends or they did not know.

When health reform opponents were asked an open-ended question about why they were opposed, only 3 percent cited the abortion issue. The top responses, at 27 percent each, were that it would be too expensive and it would increase government involvement in health care.

Although the Senate version of health reform legislation proposed by Reid does not contain provisions that the U.S. Catholic bishops say are necessary to prevent the use of any federal funds for abortion, House Speaker Nancy Pelosi said Nov. 20 that the final compromise legislation between the House and the Senate would be “abortion-neutral.”

“I believe that there’s plenty area for common ground,” Pelosi said on the National Public Radio program “Morning Edition.” “We all agree that there will be no federal funding for abortion. That’s never been a question.”