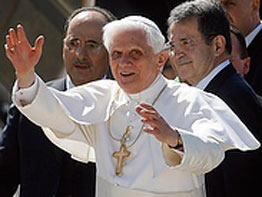 NEW HAVEN, Conn. – Pope Benedict XVI’s U.S. visit impacted public attitudes toward the pope, the church and people’s willingness to live their faith more fully, according to a poll commissioned by the Knights of Columbus.

The nationwide poll of 1,013 adults was conducted by the Marist College Institute for Public Opinion in Poughkeepsie, N.Y., April 22-24, just after the April 15-20 papal visit. Marist conducted a similar poll prior to the pope’s visit. Both polls had a margin of error of plus or minus 3.1 percentage points.

The percentage of Americans with a favorable view of Pope Benedict jumped from 58 percent prior to his visit to 71 percent afterward. Similarly, the percentage of those who described the pope positively as a spiritual leader increased from 53 percent to 62 percent.

Poll results also showed that respondents have a higher opinion of the pope as a good world leader – 51 percent now, compared to 41 percent before the visit. And 56 percent of adults said his ability to promote good relations between the Catholic Church and other religions was good or excellent, up from 40 percent in the previous poll.

A majority of Americans, 55 percent, said the pope spent the right amount of time during his visit discussing the clergy abuse crisis and 58 percent were satisfied with his apology for the scandal. But 46 percent of respondents said the church has not done enough to avoid a recurrence of the abuse scandal.

A significant number of Americans are prepared to change their personal involvement as a result of the pope’s April visit to Washington and New York. About 40 percent said they are more likely to lead a moral life and make family a bigger part of their lives and one-third are more likely to participate in elections, community activities and their churches.

Supreme Knight Carl Anderson said the poll results “show clearly that Pope Benedict has presented the Catholics of the United States with a tremendous opportunity. Americans are a religious people, and they responded very positively to the message of faith, hope and love that the Holy Father delivered throughout his visit.”

“It is now up to all of us in the Catholic community,” he said, “to walk through the door he has opened for us and work together to build a civilization of love.”