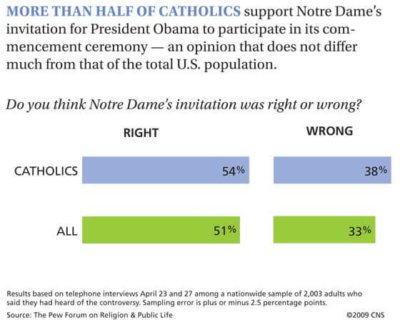 WASHINGTON – In a nationwide poll, half of U.S. Catholics overall supported the University of Notre Dame’s decision to invite President Barack Obama to address college graduates while 28 percent opposed it.

But when the Catholics polled were divided into categories of those who attended weekly Mass and those who did not, the numbers shifted. Thirty-seven percent of those attending weekly Mass supported the Indiana university’s decision while 45 percent opposed it.

The poll, conducted by the Pew Research Center’s Forum on Religion & Public Life, was released April 30. It was based on telephone interviews April 23-27 with 2,003 adults and has a margin of error of plus or minus 2.5 percentage points.

The overall Catholic response to the survey was similar to the nationwide views on the issue: 48 percent approved, 25 percent disapproved and 27 percent said they didn’t know. Of Catholics who attended Mass less than once a week 23 percent found fault with the university’s decision and 56 percent favored it.

The survey also asked if respondents were even aware of the controversy surrounding Obama’s scheduled May 17 graduation speech and his acceptance of an honorary degree from the university. Critics say the president’s support of legal abortion and embryonic stem-cell research make him an inappropriate choice for a commencement speaker at a Catholic university.

The poll also broke out white non-Hispanic Catholics from the U.S. Catholic respondents. In this category, 33 percent disagreed with the university’s decision and 47 percent favored it.