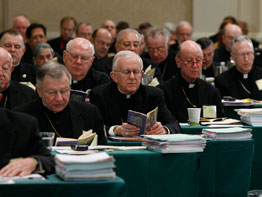 WASHINGTON – Meeting less than a week after the election of a new U.S. president, the U.S. Conference of Catholic Bishops will discuss “the practical and pastoral implications of political support for abortion.”

But the agenda for the Nov. 10-13 USCCB fall general assembly at the Baltimore Marriott Waterfront Hotel also will focus on a wide range of other issues, including such frequent topics as liturgical translations and priorities for the work of the bishops’ conference itself.

The agenda item on politics and abortion was added after comments on abortion by two Catholic politicians – House Speaker Nancy Pelosi of California and Democratic vice-presidential nominee Sen. Joseph Biden of Delaware – during separate appearances on “Meet the Press” drew responses from the chairmen of the bishops’ doctrine and pro-life committees.

It is unclear whether the bishops’ discussion was expected to focus on or result in a document. Some of the discussion also could take place behind closed doors, since only parts of the meeting’s first two days are open to the media. The rest of the meeting will be breakout sessions, executive sessions and time for prayer and reflection.

Consideration of several sections of the English translation of the third edition of the Roman Missal will take up much of the meeting. First to come before the bishops will be a 700-page translation of the proper prayers for Sundays and feast days during the liturgical year, which was rejected at the June USCCB meeting in Orlando, Fla., and in subsequent mail balloting.

The rejected translation, in the works for more than two years, was the second of 12 sections of the Roman Missal translation project that will come before the bishops through at least 2010.

The translation had come from the International Commission on English in the Liturgy, known as ICEL, but at the Orlando meeting many bishops expressed frustration that recommendations they had submitted to ICEL to clarify the sentence structure or revise archaic language had been rejected.

The Vatican recently gave its approval to the first section, a translation of the main constant parts of the Mass – the penitential rite, Gloria, creed, eucharistic prayers, eucharistic acclamations, Our Father and other prayers and responses used daily. That section had been approved by the U.S. bishops in June 2006.

Also coming up for a vote in November are the revised Grail Psalter for use in the United States and the Order for the Blessing of a Child in the Womb.

A translation of the eucharistic prayers for Masses with children also had been slated to come before the bishops, but Bishop Arthur J. Serratelli of Paterson, N.J., chairman of the Committee on Divine Worship, said in a Sept. 29 letter to his fellow bishops that the Vatican “intends to remove” that section from the Roman Missal and to “publish a separate text at a later time.

Bishop Gerald F. Kicanas of Tucson, Ariz., USCCB vice president, will present a report in November on the work of five task forces focusing on conference priorities – strengthening marriage, faith formation and sacramental practice, the life and dignity of the human person, cultural diversity in the church and promoting vocations to the priesthood and religious life.

Also scheduled for the November meeting are presentations on the “Ethical and Religious Directives for Catholic Health Care Services” and on “Reflections on Covenant and Mission,” a 2002 statement of the National Council of Synagogues and the USCCB Committee on Ecumenical and Interreligious Affairs.

In June the bishops directed their Committee on Doctrine to begin revising the ethical guidelines for Catholic health care institutions to reflect recent church documents on medically assisted nutrition and hydration.

The documents include a 2004 address on the vegetative state by Pope John Paul II to an international congress and a 2007 response by the Vatican Congregation for the Doctrine of the Faith on questions raised by the USCCB on artificial nutrition and hydration.

The “Reflections on Covenant and Mission” statement, which repudiates “campaigns that target Jews for conversion to Christianity,” has drawn criticism from Cardinal Avery Dulles as “ambiguous, if not erroneous, in its treatment” of evangelization, mission and other topics. Others have joined in that criticism in recent months.