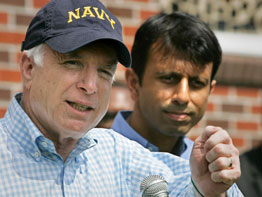 WASHINGTON – The Rev. Jim Wallis finds it unexpected and refreshing that the majority of “God talk” in this presidential election season has been among and about Democratic candidates and that the dialogue takes a broad view of what’s important to religiously motivated voters.

“The surprise is that something we believed in and hoped would happen happened a lot faster than we thought,” said Rev. Wallis, CEO of Sojourners and an ordained minister of the Sojourners Community, at an April 24 panel discussion on the role of religion in politics.

For more than a decade, Rev. Wallis has been among religious leaders pushing to get politicians to see that issues such as poverty, world debt and global warming are important to millions of voters who believe faith calls them to consider more than just abortion or narrowly defined “family values” as election issues.

He said he was pleasantly surprised to see that even among white Christian evangelicals – a plum voting bloc for Republican candidates in the last few elections – poverty and the Iraq War were polling as higher priorities than abortion and same-sex marriage.

Rev. Wallis and his fellow panelists at the event sponsored by the Center for American Progress Action Fund each have new books on similar topics. His book, “The Great Awakening: Reviving Faith & Politics in a Post-Religious Right America,” argues that the era of the “religious right” dominating U.S. politics is over and that people of faith of all political leanings are obliged to push for social justice in society.

Joining him were syndicated columnist E.J. Dionne, author of “Souled Out: Reclaiming Faith & Politics After the Religious Right,” and Amy Sullivan, the nation editor at Time magazine and author of “The Party Faithful: How and Why Democrats Are Closing the God Gap.”

The panelists seemed to agree that the two remaining Democratic candidates for president understand the theses of such books, as evidenced by their campaigns’ outreach efforts to religious groups and the openness with which both Senators Barack Obama of Illinois and Hillary Clinton of New York have talked about the influence of faith in their public and private lives.

Ms. Sullivan said she wouldn’t have believed it “if you had told us four years ago that it would be the Republican nominee who had his religious outreach people” leave in disgust “and who is not on good terms with religious conservatives.”

Sen. John McCain of Arizona has in the last week made several campaign appearances at Catholic institutions. But he’s been under fire for weeks for accepting an endorsement by the Rev. John Hagee, a televangelist who has a broadcast trail of characterizing the Catholic Church as “the great whore,’ an ‘apostate church,’ the ‘Antichrist’ and a ‘false cult system.’“

On April 24 Sen. McCain repudiated Rev. Hagee’s remarks, saying he does not accept the views of everyone who endorses him.

A February article in Christianity Today on Sen. McCain’s relationship with evangelicals notes that in the 2000 election he described the Rev. Pat Robertson and the late Rev. Jerry Falwell as “agents of intolerance” and with some evangelicals that history haunts him.

The article recounted the April 2007 firing of two McCain aides who had been hired to lead religious outreach. They later complained about the candidate’s “lack of effort to connect with voters on religious terms,” the article noted. It quoted Furman University political science professor Jim Guth as saying the former aides “reported a contempt (in the campaign) toward conservative Protestants and traditionalist Catholics.”

Such problems sound like the stories Ms. Sullivan’s book tells about the 2004 Democratic presidential campaign of Sen. John Kerry, the first Catholic nominee since 1960, and how it failed to muster support among religious groups. One chapter is headlined with a quote from a senior Kerry campaign staffer who was asked about outreach to churches in Ohio other than black Protestant congregations: “We don’t do white churches.”

This time around, Sen. Clinton and Sen. Obama seem to understand that, as Ms. Sullivan noted, such an attitude “leaves out three-quarters of the electorate.”

Ten days before the April 22 Pennsylvania primary Sen. Obama and Sen. Clinton participated in a nationally telecast discussion about the role of faith in politics. Called the Compassion Forum, it was sponsored by religious leaders from across the spectrum of faiths and political views.

Both candidates tackled questions about their personal religious influences and how faith affects their public policy decisions.

Sen. Obama’s campaign recently announced a roster including politicians, several nuns and a handful of former staffers of the U.S. Conference of Catholic Bishops as his Catholics for Obama national advisory council.

It includes: Dominican Sister Jamie Phelps, director and professor of theology at the Institute for Black Catholic Studies at Xavier University in New Orleans; Sister Catherine Pinkerton, a Sister of St. Joseph and lobbyist for Network, the Catholic social justice lobby; Sharon Daly, a retired vice president for Catholic Charities USA; Ron Cruz, former head of the USCCB’s Hispanic ministry office; and Catholic academics including Mary Jo Bane of Harvard’s Kennedy School of Government in Cambridge, Mass., Lisa Cahill of Boston College and David O’Brien of the College of the Holy Cross in Worcester, Mass.

Sen. Clinton has not publicized a list of her Catholic advisers. Calls to her director of faith-based operations were not returned by April 25.