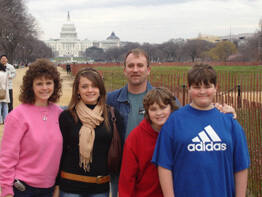 When Karolina Pioro was chosen as a foreign exchange student to the United States, the 17-year-old Polish teen thought for sure she would be living in a metropolis with bustling streets and tall buildings.

After arriving in the tiny Western Maryland community of Grantsville in late August, she was surprised to discover a wholly different slice of America.

“I was shocked,” remembered Karolina, who is living with Steve and Jennifer Adams, parishioners of St. Ann, Grantsville.

The mountainous region of her home in southeastern Poland shares a similar geography to her new home in Garrett County, she said.

“I’m glad I’m here,” she said, noting that she lives in a Polish city called Kielce that is much more urban than Grantsville. “It’s a new experience.”

A senior at Northern Garrett High School, Karolina said she found it an unusual departure from her Polish school that religion is not mentioned in U.S. public schools.

“The teachers here don’t talk about God at school – maybe in an English class, but just in the context of the poetry,” she said. “They don’t want to offend. I miss it.”

During a recent visit to Baltimore, Karolina toured the restored Basilica of the National Shrine of the Assumption of the Blessed Virgin Mary downtown. While Americans consider the church a very old building, Karolina called it “only 200 years old.”

In Poland, there are basilicas and cathedrals that are several hundred years old, she said.

Karolina, a participant in a Rotary Club foreign exchange program, described her new friends in Western Maryland as “very nice” and welcoming. She attends religious education classes at St. Ann.

Mrs. Adams said she has been impressed by her Polish guest’s devotion to her religious convictions.
“Her faith is strong and the most important part of her life,” Mrs. Adams said. “As a catechist for high school students, I am very encouraged to see a teen so in love with God, Jesus, the Eucharist and the traditions of the Catholic Church.”

“Karolina has been such a bright spot in our daily lives,” Mrs. Adams said. “She is a beautiful role model, not just for her peers but for everyone she meets. We joke often that we’re not giving her back.”