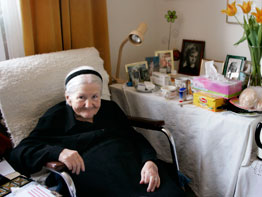 WARSAW, Poland – Polish church leaders paid tribute to Irena Sendler, a Catholic social worker who saved approximately 2,500 Jewish children from being killed by the Nazis during the Holocaust.

“Everyone who survived the war is very much aware that her kind of heroism could be born only in someone with a very great heart,” said Bishop Tadeusz Pieronek, former secretary-general of the Polish bishops’ conference. “Irena Sendler was one of those people able to resist the greatest evil that rampaged through the world in the past century. It’s a pity her greatness was not noticed by the international institutions even after her actions were brought to light.”

She was awarded the Righteous Among the Nations honor by Israel’s Yad Vashem in 1965 and Poland’s highest honor, the White Eagle, in 2003 for smuggling children from Warsaw’s Jewish ghetto to safe homes, orphanages and Catholic convents in Poland.

Archbishop Jozef Zycinski of Lublin said it was appropriate Ms. Sendler received Polish and Jewish honors “at a time when many claim the only reality is nihilism and emptiness.”

“Her life is eloquent testimony to the many quiet, unnoticed heroes who live among us, giving witness to the same respect for man,” the archbishop told the Polish press agency, PAP, after her death. “It shows respect for moral authorities who do not create a noisy atmosphere around themselves, but take responsibility for those values for which they might once have paid the price of life.”

Poland’s U.S.-born Chief Rabbi Michael Schudrich said Ms. Sendler had demonstrated “the need to be moral and ready to help others.”

He said Ms. Sendler had denied being a hero and had insisted she “simply stayed normal when the whole world had gone mad.”

Ms. Sendler, who headed the children’s unit of an underground organization called the Council for Aid to Jews, or Zegota, was arrested and tortured by the Gestapo and sentenced to death in 1943.

She escaped when Zegota bribed her German guards, and she continued rescuing Jewish children.

Her work was forgotten largely after World War II, when Poland’s communist regime suppressed records of the underground’s wartime role, but became known internationally when Norman Conard, an American teacher in Uniontown, Kan., produced a play about her in 1999.