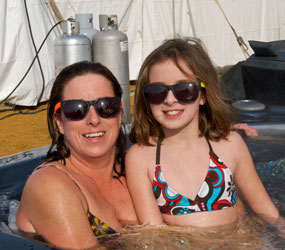 There was a time when Karen Pizza, like many people, didn’t know how to interact with a special needs person.

“It’s my passion,” Karen said. “I think it opens my vision to the world. You can’t help but smile because they’re always smiling.”

In the previous 14 years of its existence, 14,000 people have participated in the Plunge, raising about $16.1 million for Special Olympics Maryland athletes.

For the last several months, Karen, 46, and her 11-year-old daughter, Lauren, have been relentlessly raising money as Super Plungers, teams that have plunged before and that have committed to raising at least $10,000. Known as the Plunging Pizzas, the duo is the only mother-daughter Super Plunger tandem in the state and perhaps the country. They must dip in the water every hour for 24 hours.

Jumping in the water gives participants a surge of adrenaline.

“Everybody’s out running and screaming,” Karen said. “When you hit that water, ‘Oh, wow, that’s what that feels like!’ Usually, I’ll go all the way in, completely under.”

Lauren doesn’t shy away either. Even when she was tired a year ago, the student at St. Margaret’s parish school kept her pledge to get in once an hour.

“My friends think it’s cool,” Lauren said. “They say they would do it too if they could raise the money.”

They raised $13,000 a year ago and are seeking to match or perhaps surpass that total this year. The parishioners of St. Margaret in Bel Air can be seen all around the Baltimore area this winter. Lauren has become something of a celebrity, as she has been featured in the Polar Bear Plunge’s magazine and video billboard advertisements. Karen has a Polar Bear Plunge advertisement that covers her car and has been holding fundraisers at restaurants and businesses.

Karen would later be thanked by the young woman’s father and told, “She loves to get up in front of everyone and perform. She hasn’t had a chance to do that on this trip. Because you included her, she got that opportunity.”

Karen now says, “I’ve grown to know her and care about her.”

Lauren said that although some special needs people have different “shells” on the outside, “we’re all the same inside.”

Karen believes that raising money for Special Olympics Maryland is an extension of her Catholic-Christian upbringing, which includes attending Out Lady of Hope School in Dundalk.

“It’s a way to give back,” Karen said. “It’s a way for me to give thanks to God for blessing me with two healthy children.”

The Polar Bear Plunge is a bonding experience neither Karen nor Lauren will ever forget.

To assist the Pizzas, visit www.plungemd.com and click on 2011 Super Plungers. Look for the Plunging Pizzas. For more, visit CatholicReview.org/palmerblog.