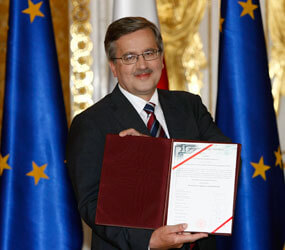 “I see him as a man of ideas with many personal qualities, a person of dialogue who can also listen – I think this election serves Poland well,” said Archbishop Henryk Muszynski of Gniezno.

“I’m also pleased with the manners shown when the results were announced. I see clear progress over what happened previously and a good sign for the future when it comes to the style of exercising government in a democratic country,” he said.

In a presidential runoff July 4, Komorowski garnered 52.6 percent of the vote, while his conservative challenger, former Prime Minister Jaroslaw Kaczynski, got 47.4 percent.

Komorowski told Poland’s Catholic information agency, KAI, July 6 that the election, which saw a national turnout of less than 55 percent, had marked a break from “factionalism and hunting for special benefits” and a move toward a “quest for what unites.” He said it would help stabilize democracy by leaving a strong government and opposition.

However, another senior prelate said he feared the victory of a candidate from a party already in government risked “not just a party monopoly, but also a monopoly of haughtiness and disdain,” and would strengthen “the diktat of the big cities, with their power, business and media.”

“Every monopoly generates deviation, scorn and foppery toward the weakest,” Archbishop Slawoj Glodz of Gdansk told KAI. “So the church will defend the weakest – this isn’t only its right, but also its duty.”

As speaker of the Polish parliament, Komorowski became acting head of state after the April 10 death of President Lech Kaczynski with 95 others in an air crash in Russia. Jaroslaw Kaczynski was the late president’s twin brother.

Arrested several times in the 1970s for anti-communist activities, Komorowski was jailed with other Solidarity union supporters under martial law from 1981 to 1983. He became a member of parliament in 1991 after the restoration of democracy and served as defense minister, 2000-2001.

As presidential candidate for Prime Minister Donald Tusk’s business-linked Civic Platform, which favors free-market reforms and closer ties with the European Union, he failed to win outright in a June 20 vote.

Several Catholic commentators have criticized Komorowski for failing to back the church on key issues, including its strong opposition to a government bill to allow state funding for in vitro fertilization.

Although several bishops rejected campaign claims that the Catholic Church had taken sides, the Gazeta Wyborcza daily claimed July 6 local priests had contributed to a “huge mobilization” on behalf of Kaczynski, who campaigned on a pro-church ticket.