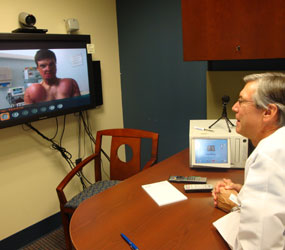 These days the physical wounds of war are inflicted not so much by bullets as by explosives, especially the improvised explosive device (IED), the “roadside bomb,” which is used with such terrible effect by the Taliban in Afghanistan and insurgents in Iraq. As a result of this new kind of guerilla-style warfare, U.S. military combat casualties are increasingly a consequence of explosion-inflicted brain damage and, all too often, horrific burns to limbs and face.

Dr. Robert J. Spence knows this all too well. The internationally-renowned plastic surgeon, medical director of Good Samaritan Hospital’s new National Burn Reconstruction Center in Baltimore, is devoting one week a month from his busy schedule to commute to San Antonio, Texas, the home of the Brooke Army Medical Center and its U.S. Army Institute of Surgical Research Burn Center, where military burn victims look to him for a new lease on life.

Spence, however, would not be able to lend his unique skills and long experience on behalf of burned warriors were it not for the technology of video conferencing which allows him to “visit” with his patients and confer with Institute medical staff during the three weeks a month he is in Baltimore.

“It’s extremely important to be able to talk to a patient before and after an operation and, in fact, to be available any time, especially if the patient has a problem or complications,” said Spence. “If it weren’t for the ability to video conference, I simply couldn’t do it.”

He said the cost for the video conferencing system he uses is underwritten by grants from the Verizon Foundation, the philanthropic arm of Verizon Communications, and the Northrop Grumman Corporation.

Among the many beneficiaries of this electronic “patient bedside” technology is U.S. Army Capt. Sam Brown, critically wounded by a roadside bomb in Afghanistan in September 2008.

He has been successfully treated for the life-threatening burns to his face, arms and legs but it is the burn scars that are now the issue because he desperately needs “reconstruction” surgery that could dramatically improve the way he functions and looks.

“The burn scars are really extensive,” Spence said, “and that means that, basically, we’re going to have to remove almost his entire face.”

Brown has endured some 16 surgeries already. With more reconstruction operations still in sight, Spence’s ability to talk directly and often with Brown through video conferencing has helped both doctor and patient.

“I never feel like I’m wasting his time or that he has some pressing engagement,” said Brown. “Clearly he has a passion for helping soldiers.”

“It’s so very gratifying when you are able to restore a patient’s function and appearance,” said Spence, adding that it is especially so when the patient is “one of our wounded warriors.”

While the treatment of burn victims has improved greatly since it became so important during the Vietnam War, actual burn reconstruction has been “somewhat neglected,” Spence said.

And that’s what makes his once-a-month presence in San Antonio, together with the video conferencing technology, so vital.

“I want to take care of the warriors; that’s number one,” said Spence, “but also, and very importantly, to be able to teach the medical staff about burn reconstruction. And for both patient care and staff education the teleconferencing is critical.”

Spending one week each month in Texas may be a little disruptive to the Stoneleigh resident’s life but he has made it as comfortable as possible by renting an apartment in San Antonio (“less expensive than a motel room.”) and having his wife, Cressy, join him every other month.

“It’s been a great experience so far,” said Spence, “because these warriors really need and deserve all the help we can give them.”