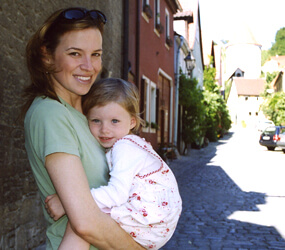 WASHINGTON – Lacy Dodd, a 33-year-old banking professional and mother of one, knows precisely where supporters and opponents of legal abortion can find common ground.

It’s on nearly four acres donated by the Benedictine monks of Belmont Abbey in Belmont, N.C., where Room at the Inn, a Charlotte-based pregnancy resource center, hopes to build the nation’s first campus-based maternity and after-care residence for pregnant college students.

Dodd, an alumna of the University of Notre Dame in Indiana and a member of the board of directors of Room at the Inn, knows firsthand how daunting it can be for a young woman in college to face an unplanned pregnancy. Back in 1999, she was a Notre Dame senior, pregnant and under pressure to have an abortion from the counselor at a local women’s clinic and from her boyfriend, also a Notre Dame senior.

She never considered abortion, and with the help of supportive family and friends is now the proud mother of a 9-year-old daughter, whose name she prefers not to make public.

Dodd told her story to Catholic News Service and to radio listeners on Christopher Closeup, the half-hour weekly radio interview produced by the Christophers, to mark Respect Life Month in October.

The radio interview airs Oct. 4, Respect Life Sunday, at 7 a.m. and 7:30 p.m. EDT on the Catholic Channel (Sirius 159 and XM 117), on the Relevant Radio network at 2:30 p.m. and online as a podcast at www.christophers.org/CloseupPodcast.

“The great unique thing about our project is that it’s nonpartisan, it’s an initiative that everyone can support,” Dodd told CNS Sept. 29. “Pro-life or pro-choice, if we want women to feel that they have a choice, this is where we can all agree.

Dodd found the resources she needed at pregnancy resource centers in South Bend, Ind., and Clearwater, Fla., and from friends and family, including her twin sister, Amanda, also a Notre Dame senior at the time. She graduated from Notre Dame on schedule with a bachelor’s degree in American studies and received her ROTC commission as a second lieutenant in the U.S. Army.

The Army deferred her service until after she gave birth, but then she and her daughter traveled to Giebelstadt Army Airfield in Germany, where her twin sister was stationed with a different unit. When Lacy Todd was deployed to Iraq for three months, Amanda Todd cared for Lacy’s daughter, who attended day care on base.

After five years in the military, Lacy Todd and her daughter moved to Charlotte, where she “finally had some stability in my life” and “felt called to get involved with a pregnancy resource center.” That led her to Room at the Inn, the only Catholic pregnancy resource and maternity after-care facility in Charlotte.

Prompted by studies that showed that most young women do not perceive college campuses as places where pregnant students can get support, even when such resources are actually available, and thanks to the monks’ donation of the land in 2005, the Room at the Inn board began a $3 million capital campaign to build a residence that they hope will be a national model for other college campuses.

The facility – which will be open to students at other colleges or vocational schools in the region – will have two residential wings housing up to 15 mothers, 15 infants and eight toddlers, as well as a chapel, laundry, playroom, kitchen and family-style dining room. Staff members with social work backgrounds will be on duty 24 hours a day.

The capital campaign is about halfway to its $3 million goal, Dodd said, adding that she hopes it will be a model for other Catholic colleges nationwide, including her alma mater, Notre Dame.

She said she is encouraged at the decision by Holy Cross Father John I. Jenkins, president of the University of Notre Dame, to form a Task Force on Supporting the Choice for Life to recommend ways that the university can support the sanctity of life.

“I hope this is an initiative that Father Jenkins’ task force will consider, because it would meet the goals of the task force,” Dodd said.

“This is a way that campus administrators can start walking the walk to help” pregnant and parenting students, she added.