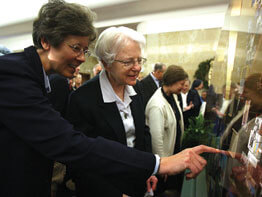 Sister Claire Debes, provincial leader of the Emmitsburg Province of the Daughters of Charity, said it was appropriate to open the bicentennial year with a Mass because St. Elizabeth Ann had a deep-rooted devotion to the Blessed Sacrament. The Jan. 4 liturgy was celebrated on the founder’s feast day, which also happened to be the feast of the Epiphany.

“It was in the Eucharist that Elizabeth Ann Seton encountered the real presence of Christ,” said Sister Claire, whose religious order is one of several women’s religious communities that trace their origins to the Sisters of Charity established by St. Elizabeth Ann.

“The Eucharist restored her strength and motivated her charity,” Sister Claire said. “With her deep love of the Eucharist, she became a light for the early American Church.”

Born in New York to a prominent Anglican family, St. Elizabeth Ann converted to Catholicism in 1805 after the death of her husband two years earlier. The widowed mother of five arrived in Baltimore in 1808 at the invitation of the Sulpicians to work as an educator. She journeyed to Emmitsburg with four companions in 1809 to develop a women’s religious community modeled on the Daughters of Charity of Paris. She established St. Joseph’s Free School in 1810 as the first free Catholic school for girls staffed by sisters in the country – the beginning of the Catholic parochial school system in the United States.

Pope Paul VI canonized St. Elizabeth Ann in 1975 as the first citizen born in the U.S. to be made a saint.

The Sisters and Daughters of Charity today minister in education, healthcare, social justice and other outreach efforts throughout the country and around the world. From St. Elizabeth Ann’s first Catholic school has grown a Catholic school system that today educates nearly 2.3 million children in 7,278 schools, according to the National Catholic Educational Association.

In his homily, Father Donald Witherup, superior general of the Sulpicians, called St. Elizabeth Ann an instrument of God’s will who “responded to revelation with spiritual openness to serve God and the church.”

Following the liturgy, Father Witherup blessed and dedicated a three-dimensional collage commemorating the 200 years of service of the Sisters and Daughters of Charity. Designed by Lawrence M. Romorini of One of a Kind Art Studio in Silver Spring, the art includes a tiny mustard seed suspended along with historic artifacts and religious symbols.

Daughter of Charity Sister Betty Ann McNeil, archivist for her order, said the mustard seed symbolizes how the work of a small band of sisters has grown into a large, far-reaching ministry that touches many lives.

Father Witherup also blessed light poles on the grounds of the basilica.

“This is a great day of joy,” said Sister Carol Durkin, a Daughter of Charity who ministers at My Brother’s Keeper in Baltimore. “I pray that God gives us the courage and wisdom to continue the legacy.”

An 11 a.m. Mass commemorating the feast of St. Elizabeth Ann Seton and the 200th anniversary of her arrival to Baltimore will be celebrated Jan. 11 at St. Mary’s Seminary Chapel, 600 North Paca Street, in Baltimore. A reception will follow.