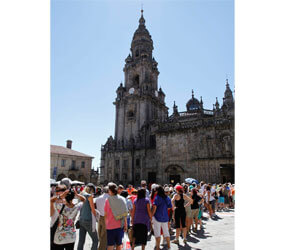 VATICAN CITY – Pope Benedict XVI has said he’s heading to Spain Nov. 6-7 as a pilgrim, and the trip will give him an opportunity to participate in the most popular foot pilgrimage in Europe, the “camino” or journey to Santiago de Compostela.

His pilgrimage also will give him an opportunity to pay homage to a more modern expression of a Spaniard’s faith when he travels to Barcelona for the dedication of Antoni Gaudi’s Church of the Holy Family, more widely known by its Spanish name, Sagrada Familia.

As a pilgrim, the pope is expected to highlight the virtue of hope and the church’s mission of charity in an increasingly secularized nation.

A traditionally Catholic country, Spain has embarked on a number of policies that have caused local bishops much concern.

Since Prime Minister Jose Luis Rodriguez Zapatero came to power in 2004, church leaders have protested the scrapping of religion classes from the state school curriculum and cuts in funding for Spain’s private schools. They also have taken issue with the government over its relaxation of divorce laws, legalization of gay marriage and legislation to make abortion more accessible.

Pope Benedict obviously has something to say about the direction Spain is moving and the trip – the pope’s 18th visit abroad – is likely to include pleas that Spaniards recognize how much the faith has and continues to contribute to the country, a theme Pope Benedict has continually shone the spotlight on during his pontificate.

A high point of the trip will be the pope’s arrival in Santiago de Compostela Nov. 6 to visit one of Catholicism’s most popular and ancient pilgrimage sites.

Tradition holds that the remains of the apostle St. James the Greater – Santiago in Spanish – are buried in the city’s cathedral. The city has been a pilgrim destination for 11 centuries and today, thousands of people still walk, bike or ride atop donkeys or horses every year to visit the cathedral.

Because the feast of St. James, July 25, fell on a Sunday this year, 2010 marks a holy year in which a special door is opened into the cathedral.

In a message to a recent conference on the pastoral care of pilgrimages and shrines, the pope said he was looking forward to his pilgrimage to the tomb of St. James. He said ever since he was elected pontiff, he wanted to live his ministry “with the sentiments of a pilgrim who travels over the roads of the world with hope and simplicity, bringing on his lips and in his heart the saving message of the risen Christ, and strengthening his brothers in the faith.”

In fact, he said he included the image of a shell – the symbol of the Santiago pilgrimage – on his papal coat-of-arms as a sign of his deeply felt pilgrim’s mission.

The other focus of the trip is the dedication Nov. 7 of the Sagrada Familia church, Gaudi’s unfinished masterpiece. A UNESCO World Heritage site, the massive church with intricate sculptured facades, attracts an estimated 10,000 visitors a day.

The church dedicated to the Holy Family was begun in 1882. But Gaudi died in 1926 before it was finished. Now completion is set for 2026, the 100th anniversary of the architect’s death. Even though church services are held in the uncompleted church, it has never been formally consecrated.

Gaudi was a Catholic who renounced secular art in his later years and dedicated much of his adult life to building the church. When questioned about the lengthy construction period, he would answer, “My client is not in a hurry.”

The architect’s sainthood cause is under way. Supporters for his beatification are working on a biography detailing the life and holiness of Gaudi. The volume, called the “positio” or position paper, will need to be filed with the Congregation for Saints’ Causes and evaluated before he can be declared venerable. Promoters say there are already two possible miracles; one miracle attributed to Gaudi’s intercession would be needed for his beatification.

The pope’s 31-hour visit will be simple: two Masses, lunches with Spanish bishops and cardinals, private meetings with the king and queen of Spain and the prince and princess of Asturias, and a visit to a Catholic-run center in Barcelona that provides social, educational and medical assistance.

There may not be much chance to speak with Prime Minister Zapatero, who is scheduled to see the pope off at the airport Nov. 7. However, the two leaders have met a number of times, most recently in June at the Vatican.

During that meeting, Zapatero pledged his government’s full support for Pope Benedict’s visits to Spain in November and again for World Youth Day in August 2011.

The Vatican said the pope and prime minister discussed world affairs as well as “the eventual presentation of a new law on religious freedom, the sacredness of human life from the moment of conception and the importance of education.”

Zapatero’s government has drafted a religious freedom law that would strengthen the secular character of the state, including by removing religious symbols from government-run buildings. Apparently, however, no action on the law is expected until after Pope Benedict’s pilgrimage.