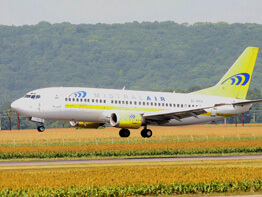 VATICAN CITY – The sky was no longer the limit when a Rome travel agency started offering specially chartered flights exclusively for globe-trotting pilgrims.

Opera Romana Pellegrinaggi, run by the Diocese of Rome, had long been offering special package tours for religious destinations worldwide. Each year some 300,000 pilgrims book their religious journey by plane, train and bus through the agency, which is headed by Cardinal Camillo Ruini, papal vicar of Rome.

But those numbers have kept soaring – so much so that Opera Romano could barely keep up with finding spots for its clients on scheduled airline flights. So the agency signed a five-year contract with Mistral Air, a small Italian airline run by the Italian postal service, to run charter flights exclusively for pilgrims.

After a successful inaugural flight from Rome to Lourdes Aug. 27, Mistral Air’s next pilgrim flights were set to start next year and were expected to transport an estimated 150,000 people each year.

Father Cesare Atuire, an official at Opera Romana, told reporters Aug. 27 the pilgrim charters will be a “religious experience from the moment the pilgrim leaves home to the moment he or she returns.”

The airline carrier said its flight crew will be trained “in voyages of a sacred nature,” and in-flight entertainment will consist of religious music and videos.

Headrest covers are emblazoned with the new charter’s slogan, “I search for your face, Lord,” and the fleet’s fuselage is – completely by coincidence – painted in the same white and yellow colors of the Vatican, with splashes of blue rainbows here and there.

While low-cost plane travel to holy places will make visiting Christian sites possible for many more people, some wonder whether jetting thousands of people for quick visits will fundamentally alter the slower-paced spiritual nature of a religious pilgrimage.

Despite the conveniences of air travel, greater numbers of modern-day pilgrims are traveling the old-fashioned way with a backpack, plenty of water and a sturdy pair of shoes.

One of the most ancient and most popular paths for the foot pilgrim is to the Spanish city of Santiago de Compostela. More than 100,000 people walk, bike or ride atop donkeys or horses every year to visit the cathedral where, according to tradition, the remains of St. James the Greater are buried.

A once little-known pilgrim path from Canterbury, England, to Rome – the Francigena Way – is gaining in popularity. More than two dozen cyclists from Canterbury arrived in Rome Aug. 26 after pedaling 1,110 miles to raise money for the restoration of Canterbury’s famous cathedral.

That same week Vatican Radio received calls asking whether a pilgrim traveling by a horse and buggy along the same medieval path had made it yet to St. Peter’s Square.

But perhaps the road least traveled out of all the ancient pilgrim paths is the one that runs from France to Jerusalem.

In an effort to bring it back to life and spread a message of peace, one U.S. pilgrim completed the 2,700-mile trek from Dijon, France, through 10 countries and two continents in five months.

Brandon Wilson of Maui, Hawaii, told Catholic News Service he “wanted to open this path up as a path others could follow.”

Without the signposts and logistical support that other pilgrim paths offer, Wilson’s route to Jerusalem was based on an itinerary – printed off the Internet – of one of the leaders of the First Crusade, Godfrey of Bouillon.

It took this 11th-century duke three years to get to the Holy Land because “he had to fight along the way,” Wilson said.

Wilson wanted to turn this “trail of war” into a path for peace, especially since large tracts of the route cut through areas still shaken by violence or instability today.

He said he traveled according to the true pilgrim tradition: no tent, just 15 pounds of supplies in his pack and a lot of faith in the goodness of humanity.

“We were helped by people we called angels who appeared along the way with food when we were hungry and water when we were thirsty,” he said.

The site of a lone man traveling across Europe and parts of Asia carrying nothing but a backpack and a message of peace attracted the attention of many, he said. Passersby were so moved by his journey of faith that they contacted media to tell his story and reached “easily millions of people with this message.”

“It gave me the chance to set the record straight that we don’t always agree with our leaders (about the necessity of war) and to dispel myths, fears and prejudices on both sides,” he said.

Traveling lightly to the world’s holy sites, Wilson said, “puts you in touch with the Christian idea of having faith.”

Lacking the certainties of booked meals and rooms that come with package tours makes the pilgrim “learn to trust again in the goodness of people,” and by “breaking bread, laughing, rubbing sore feet” with others “you discover the commonalities” that link humanity, he said, “and all of a sudden all our differences fall by the wayside.”