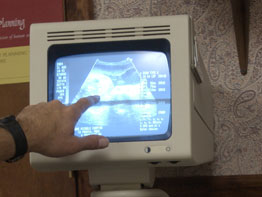 WASHINGTON – State by state, Catholics and others in the pro-life community are accomplishing a mission that they hope will give pregnant women considering an abortion the clearest proof yet that their action would still an unborn child’s beating heart.

So far in 2008, four states – Ohio, Oklahoma, South Carolina and South Dakota – have passed legislation or strengthened earlier laws requiring abortion providers to offer women considering an abortion an opportunity to view the ultrasound image of their unborn child.

The latest is Oklahoma, where both houses of the Legislature overrode a veto by Gov. Brad Henry, who said he considered it “unconscionable” that the legislation did not include an exception for women who were victims of rape and incest.

“What is truly unconscionable,” said Janet Morana, a co-founder of Silent No More Awareness Campaign, “is Gov. Henry’s abandoning these women to people whose only interest is making money off of their suffering.”

Silent No More, a coalition of more than 4,000 women and men who witness to the negative aftereffects of abortion, is a joint project of Priests for Life and Anglicans for Life.

In addition to the four added or expanded in 2008, states with ultrasound laws include Alabama, Arkansas, Georgia, Idaho, Indiana, Michigan, Mississippi, Utah and Wisconsin. Louisiana requires an ultrasound if a pregnancy has reached 20 weeks and says the woman must be offered an opportunity to view it. Florida and Arizona laws compel the use of ultrasound for any abortion after 12 weeks, but the woman has to ask to see the images.

At the federal level, the Ultrasound Informed Consent Act was introduced in both the House and Senate in the 110th Congress but neither bill made it out of committee.

Oklahoma’s law is the strongest in the nation, requiring that at least one hour before an abortion an ultrasound be performed and displayed, allowing a woman to view it if she chooses. It beefed up an earlier law mandating that women be told where they could obtain a free ultrasound and fetal heart-tone service before an abortion.

Mary Spaulding Balch, state legislative director for the National Right to Life Committee, praised Oklahoma legislators after the override vote for “doing everything possible to ensure that a mother is given the opportunity to see her unborn child in real time and learn all the facts before making the life and death decision of abortion.”

The ultrasound has a storied past in the pro-life movement, going back to Dr. Bernard Nathanson’s 1984 documentary, “The Silent Scream,” which used ultrasound images to show the horrors of abortion in graphic detail. Dr. Nathanson, a founding member of what has now become NARAL Pro-Choice America, later became a staunch pro-life advocate and converted to Catholicism in 1996.

In the years since “The Silent Scream,” ultrasound machines have become much more sophisticated and, at the same time, much less costly, finding a place in many crisis pregnancy centers across the country.

Most of the evidence that ultrasounds can help change a woman’s mind about whether to have an abortion is anecdotal, but a study at a Massachusetts crisis pregnancy center in the early 2000s showed startling results.

Dr. Eric J. Keroack, then medical director of five centers run by A Woman’s Concern in Massachusetts, studied the cases of 436 women considering abortion between October 2000 and April 2002 at a center in Revere and whose outcomes could be traced.

Of those who were considered “abortion-vulnerable” – that is, facing obstacles that they may feel incapable of or unwilling to handle but who had not yet decided to abort – 75.5 percent decided not to have an abortion after viewing the ultrasound of her unborn baby, while 24.5 percent went ahead with an abortion.